Recipe for a storm 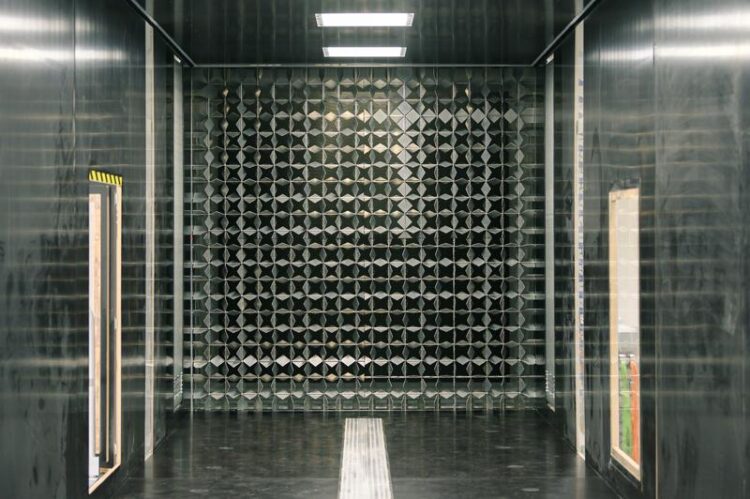 The active grid in the wind tunnel can stir up air flows to create realistic storm turbulence.
University of Oldenburg/Mohssen Assanimoghaddam

Turbulence is an omnipresent phenomenon – and one of the great mysteries of physics. A research team from the University of Oldenburg has now succeeded in generating realistic storm turbulence in the wind tunnel of the Center for Wind Energy Research (ForWind).

Strong storms often seem to leave behind random destruction: While the roof tiles of one house are blown away, the neighboring property may not be damaged at all. What causes these differences are wind gusts – or, as physicists say, local turbulence. It results from large-scale atmospheric flows, but up to now, it is impossible to predict it in great detail.

Experts from the University of Oldenburg and the Université de Lyon have now paved the way for studying small-scale turbulence: The team led by Oldenburg physicist Prof. Dr. Joachim Peinke succeeded in generating turbulent flows in a wind tunnel. The flows resembled those occurring in big gales. The team has found a way to literally cut a slice out of a storm, the researchers report in the journal Physical Review Letters. “Our experimental discovery makes our wind tunnel a model for a new generation of such facilities in which, for example, the effects of turbulence on wind turbines can be realistically investigated,” says Peinke.

The most important parameter characterising the turbulence of a flow is the so-called Reynolds number: This physical quantity describes the ratio of kinetic energy to frictional forces in a medium. In simple terms, you can say: The greater the Reynolds number, the more turbulent the flow. One of the greatest mysteries of turbulence is its statistics: Extreme events such as strong, sudden wind gusts occur more frequently if you look at smaller scales.

“The turbulent eddies of a flow become more severe on smaller scales,” explains Peinke, who heads the research group Turbulence, Wind Energy and Stochastics. In a strong storm – that is, when the Reynolds number is high – a fly is therefore affected by much gustier flow conditions than, say, an airplane. The specific reasons for this are not well known: the physical equations describing fluids are not yet solved when it comes to turbulence. This task is one of the famous millennium problems of mathematics, on whose solution the Clay Mathematics Institute in the U.S. has put up one million dollars each.

In the large wind tunnel of the Center for Wind Energy Research (ForWind), the Oldenburg team has now succeeded in generating more turbulent wind conditions than ever before. Compared to previous experiments, the researchers increased the Reynolds number a hundred times and thus simulated conditions similar to those encountered in a real storm. “We do not yet see an upper limit,” says Peinke. “The turbulence generated is already very close to reality.”

Experiments in the wind tunnel

The Oldenburg wind tunnel has a 30-meter long test section. Four fans can generate wind speeds of up to 150 kilometers per hour, which corresponds to a category 1 hurricane. To create turbulent air flow, the researchers use a so-called active grid, which was developed for the special requirements in the large Oldenburg wind tunnel. The structure, three by three meters in size, is located at the beginning of the wind tunnel and consists of almost a thousand small, diamond-shaped aluminum wings. The metal plates are movable. They can be rotated in two directions via 80 horizontal and vertical shafts. This allows the wind researchers to selectively block and reopen small areas of the wind tunnel nozzle for a short time, causing air to be swirled. “With the active grid – the largest of its kind in the world – we can generate many different turbulent wind fields in the wind tunnel,” explains Lars Neuhaus, who is also a member of the team and played a key role in this study.

For the experiments, the team varied the movement of the grid in a chaotic manner similar to the conditions occurring in turbulent air flow. They also changed the power of the fans irregularly. Thus, in addition to small-scale turbulence, the air flow generated a larger movement in the longitudinal direction of the wind tunnel. “Our main finding is that the wind tunnel flow combines these two components into perfect, realistic storm turbulence,” explains co-author Dr. Michael Hölling. The physicist also chairs the international Wind Tunnel Testing Committee of the European Academy of Wind Energy (EAWE). This storm turbulence emerged 10 to 20 meters behind the active grid.

Eddies on a small scale

“By adjusting the grid and the fans of the wind tunnel, we have generated a large-scale turbulence about ten to one hundred metres in size. At the same time, a small-scale turbulence with dimensions of a few meters and less appeared spontaneously. However, we still don’t know exactly why,” Hölling explains. As he and his colleagues report, this new approach makes it possible to scale down atmospheric turbulence relevant to wind turbines, aircraft or houses to a size of one meter in the wind tunnel. This will allow researchers to conduct realistic experiments with miniaturized models in the future – in which extreme gusts occur just as frequently as in real storms.