Home / Physics and Astronomy / Physicists have developed an efficient modem for a future quantum internet
05.11.2020

Physicists have developed an efficient modem for a future quantum internet 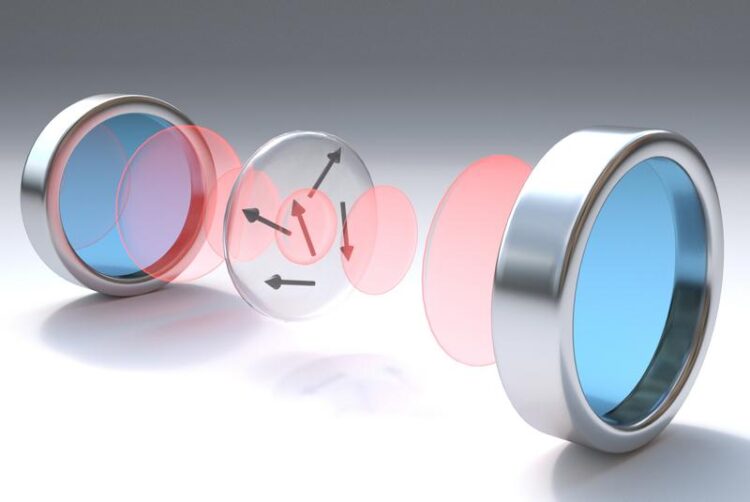 The Garching quantum modem: The crystal disk with the quantum bits of erbium atoms (arrows) is in the middle, the back and forth reflected infrared light is indicated by the red disks.
Christoph Hohmann (MCQST)

Physicists at the Max Planck Institute of Quantum Optics in Garching near Munich have developed the basic technology for a new “quantum modem”, which will allow users to connect to a future quantum internet that is based on the existing fibre optic network infrastructure.

The first quantum revolution brought about semiconductor electronics, the laser and finally the internet. The second quantum revolution promises spy-proof communication or quantum computers for previously unsolvable computing tasks. But this revolution is still in its infancy. A central research object is the interface between local quantum devices and light quanta that enable the remote transmission of highly sensitive quantum information.

The Otto Hahn group “Quantum Networks” headed by Andreas Reiserer at the Max Planck Institute of Quantum Optics in Garching is researching such a “quantum modem”. The team has now achieved a first breakthrough in a relatively simple but highly efficient technology that can be integrated into existing fibre optic networks. The work is published today in “Physical Review X”.

Global quantum network as a goal

Quantum internet is about a global networking of new technologies that make consequent use of quantum physics stronger than ever before. However, this requires suitable interfaces for the extremely sensitive quantum information, which is an enormous technical challenge. Such interfaces are therefore a central focus of fundamental research. They must ensure that stationary quantum bits – qubits for short – interact efficiently with “flying” qubits for long-distance communication without destroying the quantum information. Stationary qubits are located in local devices, such as the memory or processor of a quantum computer. Flying qubits are typically light quanta, also called photons, that transport the quantum information through the air, a vacuum of space or through fibre optic networks.

The “quantum modem” is designed to efficiently establish a connection between flying and stationary qubits. For this purpose, the team around Andreas Reiserer and his doctoral student Benjamin Merkel has developed a new technology and just demonstrated its basic functionality in their new paper. Its decisive advantage is that it could be integrated into the existing telecommunications fibre-optic network. This would be the fastest way to advance the functioning long-distance networking of quantum technologies.

The new technique uses erbium atoms as stationary qubits. They are suitable because their electrons can make a quantum leap that matches the standard infrared wavelength of the photons in the glass fibre networks. However, the photons must shake the erbium atoms intensively for the quantum leap to happen. To achieve this, the team packed the atoms into a transparent crystal made of an yttrium silicate compound, which is five times thinner than a human hair.

This crystal, in turn, is placed like sandwich spread between two almost perfect mirrors. In the mirror cabinet, the photons fly back and forth like ping-pong balls, passing many times through the crystal. In this way they animate the erbium atoms to make their quantum leap much more efficiently and almost sixty times faster than without this mirror cabinet. Since the mirrors, despite their perfection, are also slightly permeable to photons, the modem can connect to the network.

The team was now able to demonstrate that this principle works very successfully and efficiently. The Garching quantum modem is still purely fundamental research. But it has the potential to advance the technical realisation of a quantum internet.

This is a short version. A more detailed version can be read here: https://www.mpq.mpg.de/modem-quantum-internet