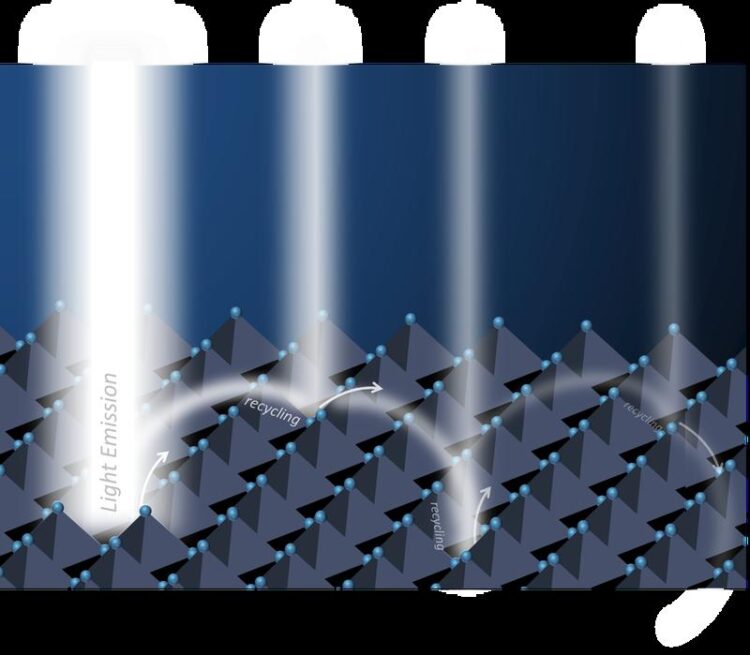 Scientists from TU Dresden, in cooperation with researchers at Seoul National University (SNU) and Korea University (KU), demonstrated the role of the re-use of photons (known as ‘photon recycling’) and light scattering effects in perovskite solar cells, providing a pathway towards high-efficiency solar energy conversion. The study has been published in the renowned journal ‘Science Advances’.

Metal halide perovskites are receiving great attention as next-generation semiconductors for solar energy conversion. Since the first demonstration of 3.8% efficiency in 2009, efficiencies have increased rapidly and state-of-the-art perovskite solar cells exhibit high efficiencies over 25%, close to the record efficiencies of silicon photovoltaics. This fast growth during the last decade raises the question of whether perovskite solar cells will be able to reach the upper (thermodynamic) limit of photovoltaic efficiency, which is known to be 34% in single-junction semiconductors. To approach this goal, it is theoretically known that the solar cell must not only be a good light absorber, but also be a good light emitter.

The researchers from the Dresden Integrated Center for Applied Physics and Photonic Materials (IAPP) at the TU Dresden noted the role of the photon recycling effect. When a photon is radiated inside re-absorbing semiconductors such as perovskites, it can be re-absorbed by the emitter itself and generate a new photon via photoluminescence. Such a process of recursively re-absorbing and re-emitting the photons is called photon recycling. While this phenomenon has been previously demonstrated by several research groups, its practical contribution to the efficiency of perovskite solar cells has been under extensive debate. Based on the devices prepared by the groups in SNU and KU, the IAPP researchers discovered that photon recycling and light scattering effects greatly improve the light emission efficiency by a factor of ~5, significantly improving the photovoltage of perovskite solar cells.

Their work reveals the practical benefits of photon recycling in perovskite solar cells. “Perovskites are already good absorbers. Now it’s time to improve their light-emitting ability, to even further increase their already high power conversion efficiencies”, says Dr. Changsoon Cho, who led the work as a Humboldt research fellow at IAPP. “Understanding photon recycling is a crucial step towards this direction.” The work predicts that the contribution of photon recycling, along with the suppression of various optoelectrical losses, will lead to a further increase in performance in the future. Using photon recycling, the upper limit for the efficiency of the perovskite solar cells is shown to rise from 29.2% to 31.3%.

“With the fundamental insights regarding the role of photon recycling at hand, we have a unique possibility to further enhance the perovskite solar cell efficiency, thus offering this technology ever brighter prospects to compete with the well-established silicon-based photovoltaics”, adds Prof. Yana Vaynzof, Chair of Emerging Electronic Technologies at the Institute of Applied Physics and the Center for Advancing Electronics Dresden (cfaed). Indeed, the improvements in the potential of perovskite solar cells motivate to further pursue the commercialization of this technology. “Our research shows the potential of the technology, but much further effort in research and development is needed before the technology can enter mass production”, says Prof. Karl Leo, head of the IAPP and European Inventor Award winner.