Home / Physics and Astronomy / Of harps, Christmas trees, a wandering star and the mysterious streams of cosmic rays
19.12.2019

Of harps, Christmas trees, a wandering star and the mysterious streams of cosmic rays 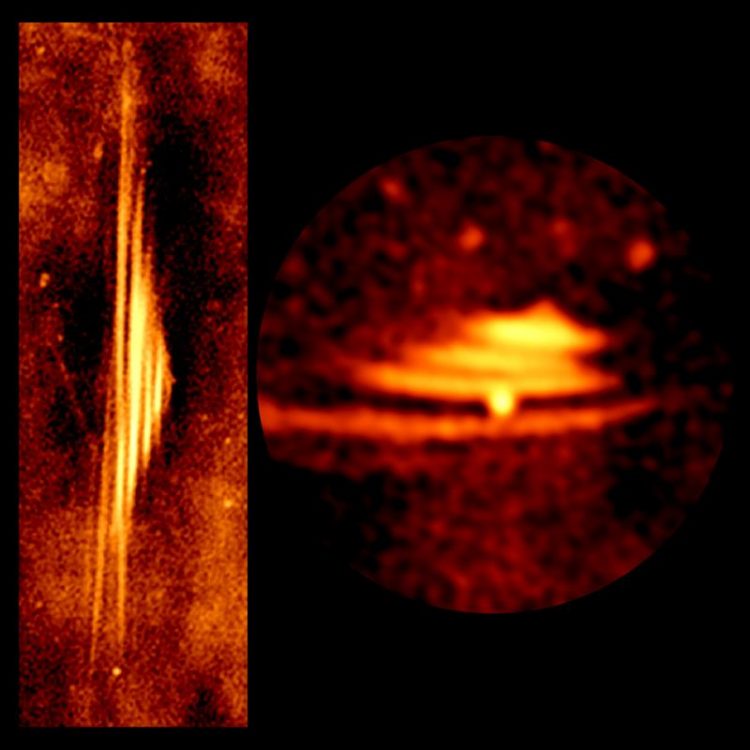 The inner region of our Milky Way galaxy is characterised by large amounts of warm gas, cosmic-rays and enhanced radio emission. “Astronomers have been observing planar radio-emitting magnetised structures in the galactic centre for almost twenty years.

Recent observations with the MeerKAT telescope in South Africa show that these are organised into groups of almost parallel filaments, that span over a length of several light years,” reports Timon Thomas from the AIP, the leading author of the study.

“The filaments are seemingly sorted by their length, so that they look like the strings of a harp.” Hence, researchers from Potsdam and Garching called these objects radio synchrotron harps. Synchrotron is the name of the mechanism that generates the radio emission. It arises when charged particles like electrons are accelerated in magnetic fields.

So far, the exact transport process of the particles along these strings has been a mystery. The researchers now assume that the individual strings show a chronological sequence in which the particles have spread along the magnetic field lines from their point of release.

If this propagation was a diffusion process, the structures seen in the radio observations should have rounded bell shapes, but they do not. By measuring one of the harps and performing detailed model calculations, the astrophysicists were able to show that streaming must be the most important transport process of cosmic rays.

“The particles “pluck” the strings and stimulate the magnetic fields to oscillate, which in turn hold the particles together to form a streaming fluid,” explains Torsten Enßlin from the MPA, the initiator of the study.

With this illuminating Advent insight, the decades-old mystery of the transport of cosmic ray particles has been solved. Contrary to the previous assumption of diffusing particles, it turns out that they mainly stream.