Observation of Second Sound in a Quantum Gas 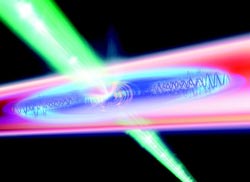 Below a critical temperature, certain fluids become superfluid and lose internal friction. In addition, fluids in this state conduct heat extremely efficiently, with energy transport occurring in a distinct temperature wave. Because of the similarities to a sound wave, this temperature wave is also called second sound. To explain the nature of superfluids, the famous physicist Lev Landau developed the theory of two-fluid hydrodynamics in Moscow in 1941.

He assumed that fluids at these low temperatures comprise a superfluid and a normal component, whereby the latter one gradually disappears with decreasing temperature. Until now superfluidity has experimentally been observed only in liquid helium and in ultracold quantum gases. Another example of a superfluid system is a neutron star, and evidence also been found in the atomic nucleus.

Superfluidity is closely connected to the technologically important superconductivity, the phenomenon of zero electrical resistance at very low temperatures.

Ultracold quantum gases are ideal model systems to experimentally observe quantum mechanical phenomena such as superfluidity. In these experiments hundreds of thousands of atoms are cooled in a vacuum chamber to almost absolute zero (−273.15 °C). By using lasers the particles in this state can be controlled and manipulated efficiently and with high accuracy. “Despite intensive research in this field for over ten years now, the phenomenon of second sound has proven elusive for detection in quantum gases,” says Rudolf Grimm from the Institute of Experimental Physics at the University of Innsbruck and the Institute of Quantum Optics and Quantum Information at the Austrian Academy of Sciences. “However, in the end it was amazingly easy to prove.”
In the laboratory, Grimm’s team of quantum physicists prepared a quantum gas consisting of about 300,000 lithium atoms. They heated the cigar-shaped particle cloud locally with a power-modulated laser beam and then observed the propagating temperature wave. “While in superfluid helium only one entropy wave is generated, our Fermi gas also exhibited some thermal expansion and, thus, a measurable density wave,” explains Grimm the crucial difference. It was also the first time that the Innsbruck physicists were able to measure the superfluid fraction in the quantum gas. “Before us nobody had been able to achieve this, which closes a fundamental gap in the research of Fermi gases,” says Rudolf Grimm.

Confirming a theory after 50 years

The research work, published now in the journal Nature, is the result of a long-term close collaboration between the physicists in Innsbruck and the Italian scientists. The theoretical physicists from the Trento Bose-Einstein Condensation Center led by Sandro Stringari and Lev Pitaevskii adapted Lev Landau‘s theory of the description of second sound for the almost one-dimensional geometry of the Innsbruck experiments. Actually Lev Pitaevskii was one of Lev Landau‘s pupils. “With this model it became easy to interpret the results of our measurement,” says Rudolf Grimm. “Moreover, our colleagues from Trento intensely supported our experiment conceptually. The results represent the pinnacle of the collaboration with our partner university in Trento and it is a vital indication for research cooperation within the European Region the Tyrol-South Tyrol-Trentino.” In June the University of Innsbruck will award an Honorary Doctorate to Lev Pitaevskii for his close collaboration with the local scientists.

The scientists are supported by the Austrian Science Fund (FWF) and the European Research Council (ERC).