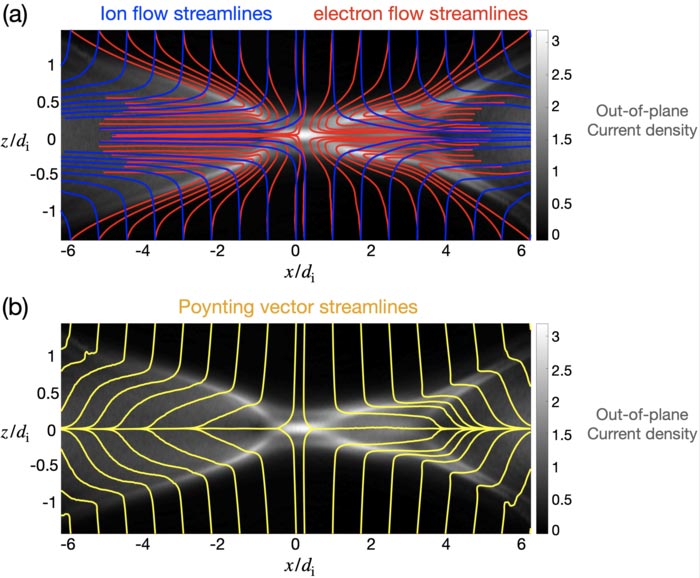 When magnetic field lines of opposite directions merge, they create explosions that can release massive amounts of energy. On the sun, the merging of opposing field lines causes solar flares and coronal mass ejections, giant bursts of energy that can travel to Earth within a day.

While the general mechanics of magnetic reconnection are known, researchers have struggled for over a half-century to explain the precise physics behind the rapid energy release that takes place.

A new Dartmouth study published in Communications Physics provides the first theoretical description of how a phenomenon known as the “Hall effect” determines the efficiency of magnetic reconnection.

“The rate at which magnetic field lines reconnect is of extreme importance for processes in space that can impact Earth,” said Yi-Hsin Liu, an assistant professor of physics and astronomy at Dartmouth. “After decades of effort, we now have a full theory to address this long-standing problem.”

Magnetic reconnection exists throughout nature in plasmas, the fourth state of matter that fills most of the visible universe. Reconnection takes place when magnetic field lines of opposite directions are drawn to each other, break apart, rejoin, and then violently snap away.

In the case of magnetic reconnection, the snapping of magnetic lines forces out magnetized plasma at high velocities. The energy is created and displaced to plasmas through a tension force like that which ejects objects from slingshots.

The Dartmouth study focuses on the reconnection rate problem, the key component of magnetic reconnection that describes the speed of the action in which magnetic lines converge and pull apart.

Previous research found that the Hall effect— the interaction between electric currents and the magnetic fields that surround them—creates the conditions for fast magnetic reconnection. But until now researchers were unable to explain the details of how exactly the Hall effect enhances the reconnection rate.

The Dartmouth theoretical study demonstrates that the Hall effect suppresses the conversion of energy from the magnetic field to plasma particles. This limits the amount of pressure at the point where they merge, forcing the magnetic field lines to curve and pinch, resulting in open outflow geometry needed to speed up the reconnection process.

“This theory addresses the important puzzle of why and how the Hall effect makes reconnection so fast,” said Liu, who serves as deputy lead of the theory and modeling team for NASA’s Magnetospheric Multiscale Mission (MMS). “With this research, we also have explained the explosive magnetic energy release process that is fundamental and ubiquitous in natural plasmas.”

The new theory could further the technical understanding of solar flares and coronal mass ejection events that cause space weather and electrical disturbances on Earth. In addition to using the reconnection rate to estimate the time scales of solar flares, it can also be used to determine the intensity of geomagnetic substorms, and the interaction between the solar wind and Earth’s magnetosphere.

The research team, funded by the National Science Foundation (NSF) and NASA, is working alongside NASA’s Magnetospheric Multiscale Mission to analyze magnetic reconnection in nature. Data from four satellites flying in tight formation around Earth’s magnetosphere as part of the NASA mission will be used to validate the Dartmouth theoretical finding.

“This work demonstrates that fundamental theory insights reinforced by modeling capabilities can advance scientific discovery,” said Vyacheslav Lukin, a program director for plasma physics at NSF. “The technological and societal implications of these results are intriguing as they can help predict impacts of space weather on the electrical grid, develop new energy sources, and explore novel space propulsion technologies.”

The new study can also inform reconnection studies in magnetically confined fusion devices and astrophysical plasmas near neutron stars and black holes. Although there is no current applied use, some researchers have considered the possibility of using magnetic reconnection in spacecraft thrusters.

This work is funded by the NSF’s PHY and AGS Divisions, NASA’s Magnetospheric Multiscale (MMS) mission, and the U.S. Department of Energy.

Founded in 1769, Dartmouth is a member of the Ivy League and consistently ranks among the world’s greatest academic institutions. Dartmouth has forged a singular identity for combining its deep commitment to outstanding undergraduate liberal arts and graduate education with distinguished research and scholarship in the Arts and Sciences and its four leading graduate schools—the Geisel School of Medicine, the Guarini School of Graduate and Advanced Studies, Thayer School of Engineering, and the Tuck School of Business