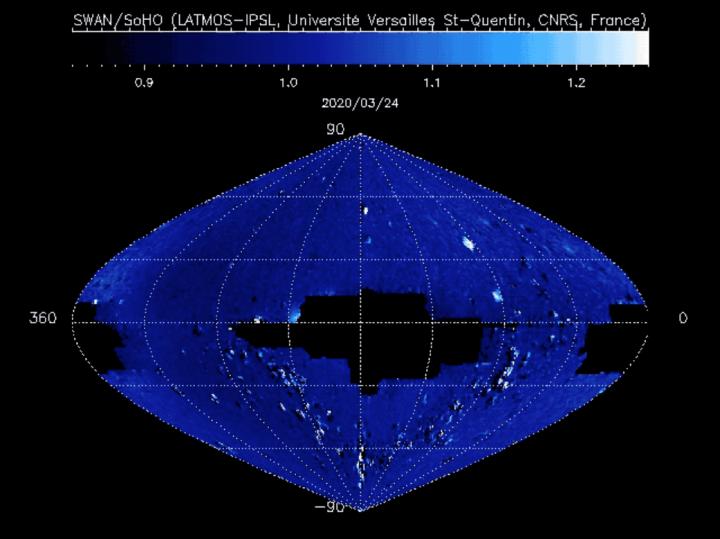 The new comet was first spotted in April 2020, by an amateur astronomer named Michael Mattiazzo using data from a SOHO instrument called Solar Wind Anisotropies, or SWAN — as seen here.

The comet appears to leave the left side of the image and reappear on the right side around May 3, because of the way SWAN's 360-degree all-sky maps are shown, much like a globe is represented by a 2D map.

SWAN maps the constantly outflowing solar wind in interplanetary space by focusing on a particular wavelength of ultraviolet light emitted by hydrogen atoms.

The new comet — officially classified C/2020 F8 (SWAN) but nicknamed Comet SWAN — was spotted in the images because it's releasing huge amounts of water, about 1.3 tons per second. As water is made of hydrogen and oxygen, this release made Comet SWAN visible to SOHO's instruments.

Comet SWAN is the 3,932nd comet discovered using data from SOHO. Almost all of the nearly 4,000 discoveries have been made using data from SOHO's coronagraph, an instrument that blocks out the Sun's bright face using a metal disk to reveal the comparatively faint outer atmosphere, the corona.

This is only the 12th comet discovered with the SWAN instrument since SOHO's launch in 1995, eight of which were also discovered by Mattiazzo.

Though it can be very difficult to predict the behavior of comets that make such close approaches to the Sun, scientists are hopeful that Comet SWAN will remain bright enough to be seen as it continues its journey.