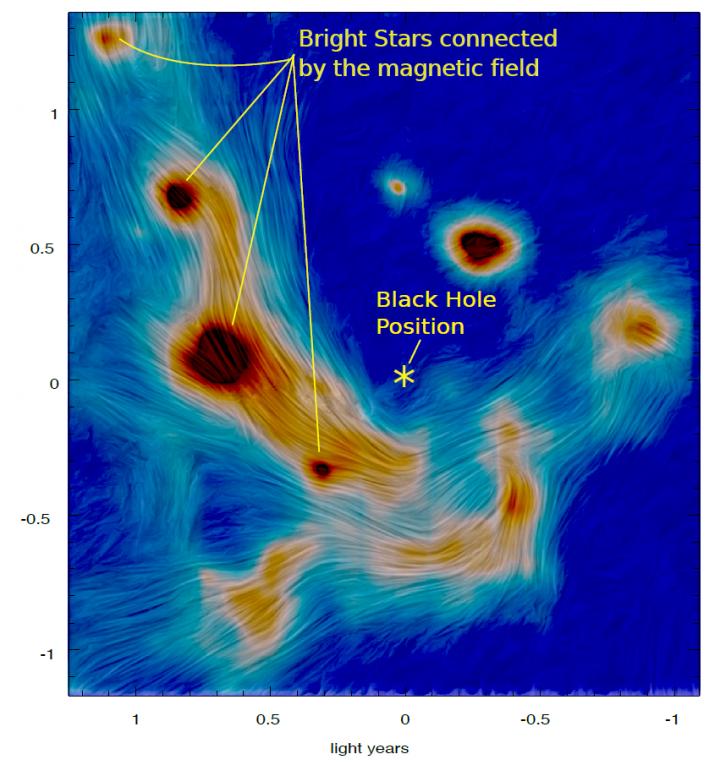 The colour scale in the image shows the amount of infrared (heat) radiation coming from warm dust particles in the filaments and luminous stars within a light year of the Galactic centre. The position of the black hole is indicated by an asterisk. The lines trace the magnetic field directions and reveal the complex interactions between the stars and the dusty filaments, and the impact that they and the gravitational force has on them. The observations were made with the largest telescope in Europe, which allowed details of the fine structure in the magnetic fields to be revealed for the first time. Credit: E. Lopez-Rodriguez / NASA Ames / University of Texas at San Antonio

Black holes are objects with gravitational fields so strong that not even light can escape their grasp. The centre of almost every galaxy appears to host a black hole, and the one we live in, the Milky Way, is no exception. Stars move around the black hole at speeds of up to 30 million kilometres an hour, indicating that it has a mass of more than a million times our Sun.

Visible light from sources in the centre of the Milky Way is blocked by clouds of gas and dust. Infrared light, as well as X-rays and radio waves, passes through this obscuring material, so astronomers use this to see the region more clearly. CanariCam combines infrared imaging with a polarising device, which preferentially filters light with the particular characteristics associated with magnetic fields.

The new map covers a region about one light year on each side of the supermassive black hole. The map shows the intensity of infrared light, and traces magnetic field lines within filaments of warm dust grains and hot gas, which appear as thin lines reminiscent of brush strokes in a painting.

The filaments, several light years long, appear to meet close to the black hole (at a point below centre in the map), and may indicate where orbits of streams of gas and dust converge. One prominent feature links some of the brightest stars in the centre of the Galaxy. Despite the strong winds flowing from these stars, the filaments remain in place, bound by the magnetic field within them. Elsewhere the magnetic field is less clearly aligned with the filaments. Depending on how the material flows, some of it may eventually be captured and engulfed by the black hole.

The new observations give astronomers more detailed information on the relationship between the bright stars and the dusty filaments. The origin of the magnetic field in this region is not understood, but it is likely that a smaller magnetic field is stretched out as the filaments are elongated by the gravitational influence of the black hole and stars in the galactic centre.

Roche praises the new technique and the result: “Big telescopes like GTC, and instruments like CanariCam, deliver real results. We're now able to watch material race around a black hole 25,000 light years away, and for the first time see magnetic fields there in detail.”

The team are using CanariCam to probe magnetic fields in dusty regions in our galaxy. They hope to obtain further observations of the Galactic Centre to investigate the larger scale magnetic field and how it links to the clouds of gas and dust orbiting the black hole further out at distances of several light years.