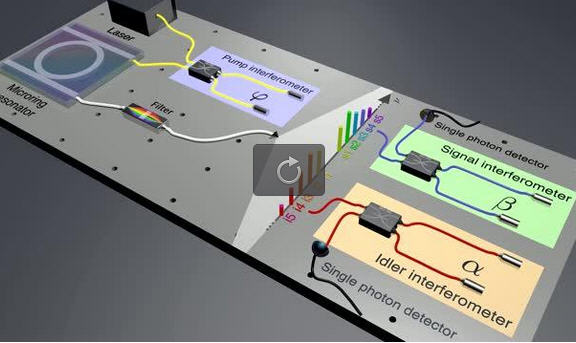 The optical chip developed at INRS by Prof. Roberto Morandotti's team overcomes a number of obstacles in the development of quantum computers. This team has demonstrated that on-chip quantum frequency combs can be used to simultaneously generate multiphoton entangled quantum bit states. It is the first chip capable of simultaneously generating multi-photon qubit states and two-photon entangled states on hundreds of frequency modes. The chip is scalable, compact, and compatible with existing technologies. Credit: Ultrafast Optical Processing Group, 2016.

Quantum computing differs fundamentally from classical computing, in that it is based on the generation and processing of qubits. Unlike classical bits, which can have a state of either 1 or 0, qubits allow a superposition of the 1 and 0 states (both simultaneously).

Strikingly, multiple qubits can be linked in so-called 'entangled' states, where the manipulation of a single qubit changes the entire system, even if individual qubits are physically distant. This property is the basis for quantum information processing, aiming towards building superfast quantum computers and transferring information in a completely secure way.

Professor Morandotti has focused his research efforts on the realization of quantum components compatible with established technologies. The chip developed by his team was designed to meet numerous criteria for its direct use: it is compact, inexpensive to make, compatible with electronic circuits, and uses standard telecommunication frequencies. It is also scalable, an essential characteristic if it is to serve as a basis for practical systems. But the biggest technological challenge is the generation of multiple, stable, and controllable entangled qubit states.

The generation of qubits can rely on several different approaches, including electron spins, atomic energy levels, and photon quantum states. Photons have the advantage of preserving entanglement over long distances and time periods. But generating entangled photon states in a compact and scalable way is difficult. “What is most important, several such states have to be generated simultaneously if we are to arrive at practical applications,” added INRS research associate Dr. Michael Kues.

Thanks to these integrated quantum frequency combs, the chip developed by INRS is able to generate entangled multi-photon qubit states over several hundred frequency modes. It is the first time anyone has demonstrated the simultaneous generation of qubit multi-photon and two-photon entangled states: Until now, integrated systems developed by other research teams had only succeeded in generating individual two-photon entangled states on a chip.

The results published in Science will provide a foundation for new research, both in integrated quantum photonics and quantum frequency combs. This could revolutionize optical quantum technologies, while at the same time maintaining compatibility with existing semiconductor chip technology.

Institut national de recherche scientifique (INRS) is a graduate-level research and training university and ranks first in Canada for research intensity (average grant funding per faculty member). INRS brings together some 150 professors and close to 700 students and postdoctoral fellows at its four centres in Montreal, Quebec City, Laval, and Varennes. Its basic research is essential to the advancement of science in Quebec and internationally even as it plays a key role in the development of concrete solutions to the problems faced by our society.