Home / Physics and Astronomy / GMRT discovers a gigantic ring of hydrogen gas around a distant galaxy
03.01.2020 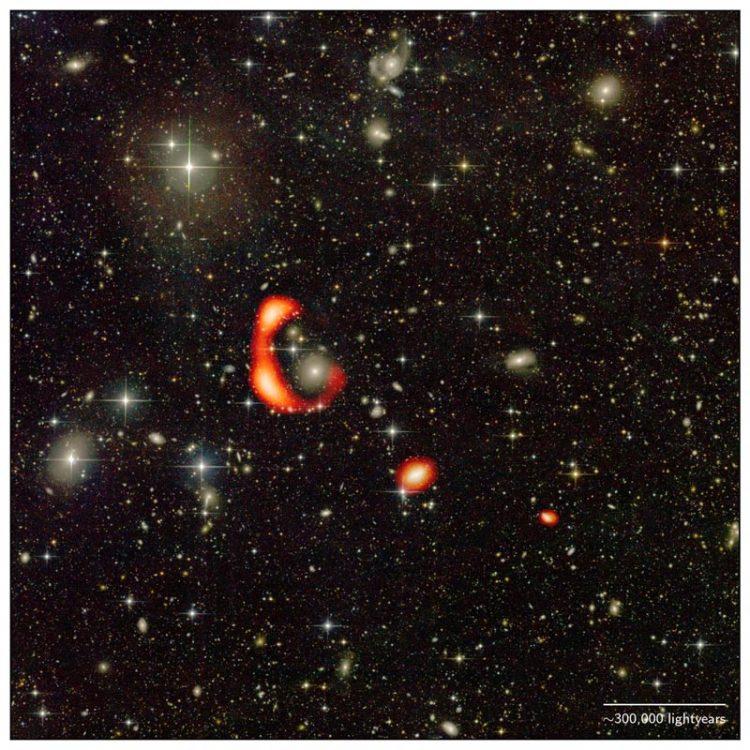 The galaxy (named AGC 203001), is located about 260 million light-years away from us. There is only one other such known system with such a large neutral hydrogen ring. The origin and formation of such rings is still a matter of debate among astrophysicists.

Neutral hydrogen emits radio waves at a wavelength of about 21cm. This radiation from neutral hydrogen atoms has allowed radio astronomers to map the amount and distribution of neutral hydrogen gas in our Milky Way galaxy and in other galaxies in the Universe.

Typically, large reservoirs of neutral hydrogen gas are found in galaxies which are actively forming new stars. However, despite showing no signs of active star formation the galaxy AGC 203001 was known to have large amounts of hydrogen, although its exact distribution was not known.

The unusual nature of this galaxy motivated astronomers in NCRA to use the GMRT to conduct high-resolution radio observation of this galaxy to find out where in the galaxy this gas lies.

The GMRT observations revealed that the neutral hydrogen is distributed in the form of a large off-centered ring extending much beyond the optical extent of this galaxy. More puzzlingly, the astronomers found that the existing optical images of the ring showed no sign of it containing stars.

In collaboration with two French astronomers, Pierre-Alain Duc and Jean-Charles Cuillandre, the NCRA team obtained a very sensitive optical image of this system using the Canada-France-Hawaii-Telescope (CFHT) in Hawaii, USA. However, even these images do not show any sign of starlight associated with the hydrogen ring.

However, such rings also generally contain stars. This is contrary to what is found in this ring. Figuring out how this ring was formed remains a challenge to astronomers.

Encouraged by this discovery, the team is now conducting a large survey to map the neutral hydrogen around several more similar galaxies. If some of them also show rings like this, it should help us to better understand the formation mechanism behind such rare rings.

(Acknowledgments: GMRT is run by the National Centre for Radio Astrophysics of the Tata Institute of Fundamental Research. Based on observations obtained with MegaPrime/MegaCam, a joint project of CFHT and CEA/DAPNIA, at the Canada-France-Hawaii Telescope (CFHT) which is operated by the National Research Council (NRC) of Canada, the Institut National des Sciences de l'Univers of the Centre National de la Recherche Scientifique of France, and the University of Hawaii.)