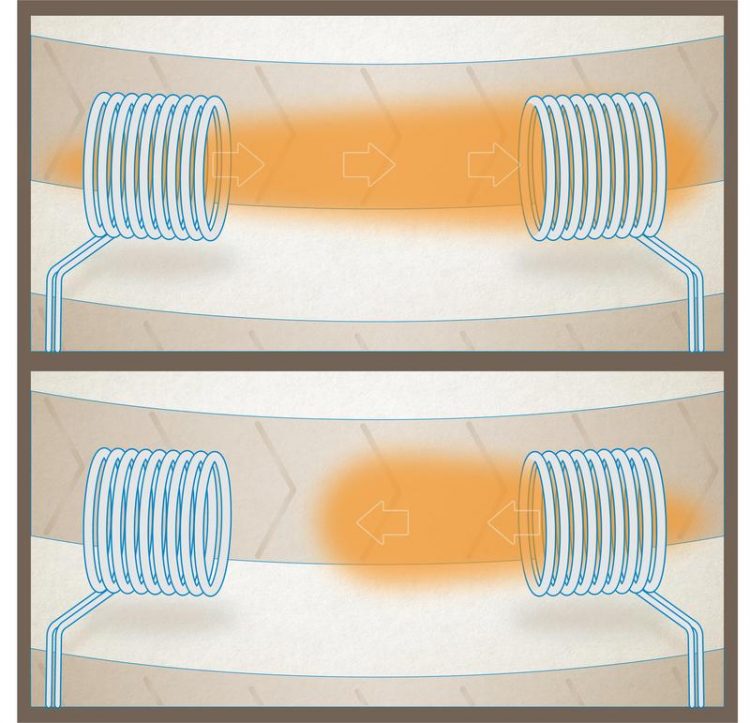 Until now there were no such components for magnetic fields. Physicists at the University of Innsbruck and the ÖAW Institute of Quantum Optics and Quantum Information (IQOQI) are now changing that. They designed the first diode for magnetic fields and demonstrated its functionality in the laboratory.

“Our device makes possible to transfer the magnetic field from a first magnetic element – for example a magnet or a coil – to a second one. When roles are inverted and one tries to send magnetic field from the second to the first, no magnetic field is transferred,” explains first author Jordi Prat Camps, who is now a researcher at the University of Sussex in England.

Technically speaking, this means that the mutual inductances between the two sources, which are routinely assumed to be symmetric, can be made extremely asymmetric. The key element to obtain this result is the use of an electrical conductor that moves with constant velocity.

“When the conductor is properly placed near to the magnetic elements and is moved at the right speed, the coupling between them becomes unidirectional, and a diode for magnetic fields is realized”, says Jordi Prat Camps.

“The availability of a new magnetic tool like a diode might thus open a bunch of new possibilities”, Gerhard Kirchmair points to the future. For example, the efficiency of wireless charging devices could be improved, since the energy can only flow from the charging station to the device and not in the other direction.

The work was financially supported by the Austrian Ministry of Education, Science and Research and the European Union and published in the journal Physical Review Letters.