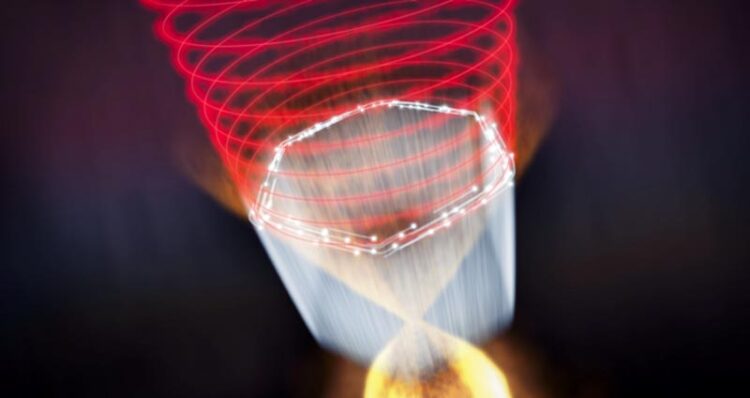 The translucent crystal at the center of this illustration is a topological insulator, a quantum material where electrons (white dots) flow freely on its surface but not through its interior. By hitting a TI with powerful pulses of circularly polarized laser light (red spiral), SLAC and Stanford scientists generated harmonics that revealed what happens when the surface switches out of its quantum phase and becomes an ordinary insulator.
Credit: Greg Stewart/SLAC National Accelerator Laboratory

Topological insulators, or TIs, have two faces: Electrons flow freely along their surface edges, like cars on a superhighway, but can’t flow through the interior of the material at all. It takes a special set of conditions to create this unique quantum state – part electrical conductor, part insulator – which researchers hope to someday exploit for things like spintronics, quantum computing and quantum sensing. For now, they’re just trying to understand what makes TIs tick.

In the latest advance along those lines, researchers at the Department of Energy’s SLAC National Accelerator Laboratory and Stanford University systematically probed the “phase transition” in which a TI loses its quantum properties and becomes just another ordinary insulator.

They did this by using spiraling beams of laser light to generate harmonics – much like the vibrations of a plucked guitar string – from the material they were examining. Those harmonics make it easy to distinguish what’s happening in the superhighway layer from what’s happening in the interior and see how one state gives way to the other, they reported in Nature Photonics today.

“The harmonics generated by the material amplify the effects we want to measure, making this a very sensitive way to see what’s going on in a TI,” said Christian Heide, a postdoctoral researcher with the Stanford PULSE Institute at SLAC, who led  the experiments.

“And since this light-based approach can be done in a lab with tabletop equipment, it makes exploring these materials easier and more accessible than some previous methods.”

These results are exciting, added PULSE principal investigator Shambhu Ghimire, because they show the new method has potential for watching TIs flip back and forth between superhighway and insulating states as it happens and in fine detail – much like a using camera with a very fast shutter speed.

This was the latest in a series of studies led by Ghimire and PULSE Director David Reis on high harmonic generation, or HHG, a phenomenon that shifts laser light to higher energies and frequencies by shining it through a material. The frequencies are shifted in distinct steps, like notes made by pressing on a guitar string.

Over the past dozen years, their research team has managed to do this in a number of materials that were thought to be unlikely or even impossible candidates for HHG, including a crystal, frozen argon gas and an atomically thin semiconductor material. They were even able to produce attosecond laser pulses – which are just a billionth of a billionth of a second  long and can be used to observe and control the movements of electrons – by shining a laser through ordinary glass.

Four years ago, postdoctoral researcher Denitsa Baykusheva joined the PULSE group with the aim of seeing if it was possible to generate HHG in topological insulators – a feat that had never been achieved in any quantum material. Over several years of work the team discovered that yes, it could be done, but only if the laser light was circularly polarized.

And this spiraling laser light had a bonus: By varying its polarization, they were able to get strong, separate signals from the TI’s superhighway surface and its roadblocked interior. This allowed them to easily distinguish what was going on in those two contrasting parts of the material.

In the current study, they set out to demonstrate what the new method could do by varying the composition of their TI material, bismuth selenide, and the properties of the ultrashort pulses of laser light they hit it with to see how each combination affected the harmonics the material generated.

First they took their samples to SLAC’s Stanford Synchrotron Radiation Lightsource (SSRL) for examination with an X-ray technique called angle-resolved photoemission spectroscopy, or ARPES. This allowed them to narrow down the general neighborhood where the transition takes place.

Then, back in the lab, they zoomed in to see more detail.

They prepared a series of bismuth selenide samples – some pure and others containing varying levels of a chemical impurity that’s known to affect electron behavior. Some of the samples were topological insulators and others were plain insulators.

Then they hit the samples with laser pulses of different energies and degrees and directions of polarization.

They discovered that circularly polarized pulses, especially the ones that spiraled clockwise, were much more efficient at producing high harmonics from superhighway surfaces than from insulating parts of the material. “The difference between the two was huge,” Heide said, so the team could easily tell the two states apart.

While pure samples were classic TIs, the material began to lose its topological abilities at an impurity level of about 4% and lost them altogether by 20%. At that point the material was an ordinary insulator.

The ultrashort laser pulses used in this study – about 100 femtoseconds, or millionths of a billionth of a second, long – pass right through the sample without damaging it, and can be tuned to probe any spot inside it, Heide said: “That’s a very big benefit.”

And like a camera with a super-fast shutter speed, this relatively small and affordable laser setup should be able to observe the characteristics of the topological transition, as well as other electronic properties and processes, in much finer detail and as they change in real time, Ghimire said.

“That’s one possibility that makes this all-optical method interesting and gives it a wide range of potential applications,” he said, “and it’s something we plan to explore in future experiments.”