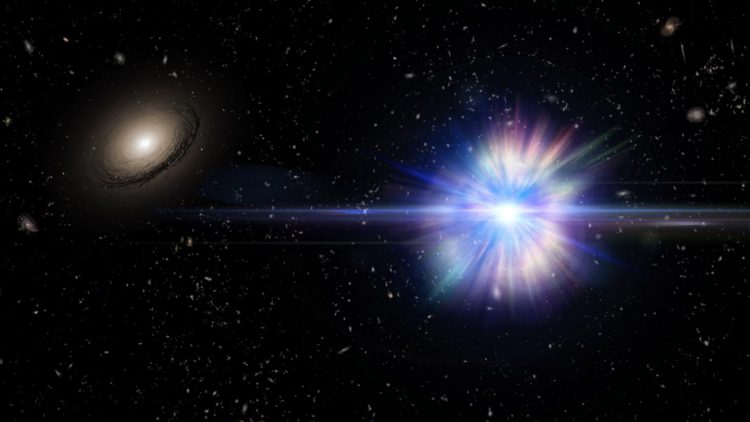 This is an artist's concept of a Type Ia supernova exploding in the region between galaxies in a large cluster of galaxies, one of which is visible at the left. Credit: Dr. Alex H Parker, NASA and the SDSS

Sharp images obtained by the Hubble Space Telescope confirm that three supernovae discovered several years ago exploded in the dark emptiness of intergalactic space, having been flung from their home galaxies millions or billions of years earlier.

Most supernovae are found inside galaxies containing hundreds of billions of stars, one of which might explode per century per galaxy.

These lonely supernovae, however, were found between galaxies in three large clusters of several thousand galaxies each. The stars' nearest neighbors were probably 300 light years away, nearly 100 times farther than our sun's nearest stellar neighbor, Proxima Centauri, 4.24 light years distant.

Such rare solitary supernovae provide an important clue to what exists in the vast empty spaces between galaxies, and can help astronomers understand how galaxy clusters formed and evolved throughout the history of the universe.

The solitary worlds reminded study leader Melissa Graham, a University of California, Berkeley, postdoctoral fellow and avid sci-fi fan, of the fictional star Thrial, which, in the Iain Banks novel Against a Dark Background, lies a million light years from any other star. One of its inhabited planets, Golter, has a nearly starless night sky.

Any planets around these intracluster stars – all old and compact stars that exploded in what are called Type Ia supernovae – were no doubt obliterated by the explosions, but they, like Golter, would have had a night sky depleted of bright stars, Graham said. The density of intracluster stars is about one-millionth what we see from Earth.

“It would have been a fairly dark background indeed,” she said, “populated only by the occasional faint and fuzzy blobs of the nearest and brightest cluster galaxies.”

Graham and her colleagues – David Sand of Texas Tech University in Lubbock, Dennis Zaritsky of the University of Arizona in Tucson and Chris Pritchet of the University of Victoria in British Columbia – will report their analysis of the three stars in a paper to be presented Friday, June 5, at a conference on supernovae at North Carolina State University in Raleigh. Their paper has also been accepted by the Astrophysical Journal.

Clusters of thousands of galaxies

The new study confirms the discovery between 2008 and 2010 of three apparently hostless supernovae by the Multi-Epoch Nearby Cluster Survey using the Canada-France-Hawaii Telescope on Mauna Kea in Hawaii. The CFHT was unable to rule out a faint galaxy hosting these supernovae. But the sensitivity and resolution of images from the Hubble Space Telescope's Advanced Camera for Surveys are 10 times better and clearly show that the supernovae exploded in empty space, far from any galaxy. They thus belong to a population of solitary stars that exist in most if not all clusters of galaxies, Graham said

While stars and supernovae typically reside in galaxies, galaxies situated in massive clusters experience gravitational forces that wrench away about 15 percent of the stars, according to a recent survey. The clusters have so much mass, though, that the displaced stars remain gravitationally bound within the sparsely populated intracluster regions.

Once dispersed, these lonely stars are too faint to be seen individually unless they explode as supernovae. Graham and her colleagues are searching for bright supernovae in intracluster space as tracers to determine the population of unseen stars. Such information provides clues about the formation and evolution of large scale structures in the universe.

“We have provided the best evidence yet that intracluster stars truly do explode as Type Ia supernovae,” Graham said, “and confirmed that hostless supernovae can be used to trace the population of intracluster stars, which is important for extending this technique to more distant clusters.”

Graham and her colleagues also found that a fourth exploding star discovered by CFHT appears to be inside a red, round region that could be a small galaxy or a globular cluster. If the supernova is in fact part of a globular cluster, it marks the first time a supernova has been confirmed to explode inside these small, dense clusters of fewer than a million stars. All four supernovae were in galaxy clusters sitting about a billion light years from Earth.

Graham said that most theoretical models for Type Ia supernovae involve a binary star system, so the exploding stars would have had a companion throughout their lifetimes.

“This is no love story, though,” she added. “The companion was either a lower-mass white dwarf that eventually got too close and was tragically fragmented into a ring that was cannibalized by the primary star, or a regular star from which the primary white dwarf star stole sips of gas from its outer layers. Either way, this transfer of material caused the primary to become unstably massive and explode as a Type Ia supernova.”

Graham's postdoctoral fellowship is supported by gifts from Gary and Cynthia Bengier.