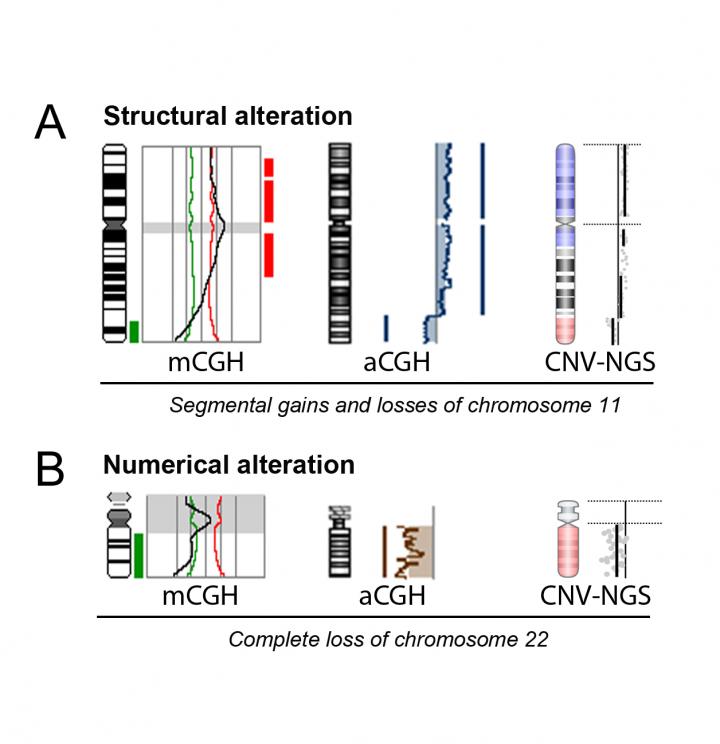 The new massive sequencing platform permits scientists to identify alterations in the structure or number of chromosomes of the embryonic cells related to over 4,800 genes. The results of the experiments conducted in the study (CNV-NGS) were later confirmed with other genomic hybridation preimplantational diagnosis techniques (mCGH and aCGH), previously developed by the research team led by UAB's researcher Joaquima Navarro. Credit: UAB

A research team from the Universitat Autònoma de Barcelona (UAB), in collaboration with the Blood and Tissue Bank of Catalonia, has managed to implement a massive sequencing platform for Preimplantation Genetic Testing (PGT) for the first time in history.

The research work has adapted the TruSight One (TSO) platform, one of today's most complete genetic panels with over 4,800 genes responsible for the most common monogenetic (hereditary) diseases, to the Double Factor Preimplantation Genetic Testing (DF-PGT).

The study, published in PLoS ONE, was led by Joaquima Navarro and Jordi Benet, researchers from the UAB Department of Cellular Biology, Physiology and Immunology, and included the collaboration of the team led by Francisco Vidal from the Blood and Tissue Bank of Catalonia.

“We successfully managed to implement an innovative, promising and universal strategy, prepared for a simultaneous diagnosis of genetic mutations and chromosomal alterations within embryos obtained by in vitro fertilisation (IVF), of benefit to the DF-PGT candidate families with mutations causing diseases included in the TSO platform. In addition, it only requires a single laboratory experiment and without the need previously to prepare the diagnosis methodology. This substantially speeds up the study process and the availability of the results of the family's single gene disorders. Until now, there was a need to prepare the specific procedures before conducting the diagnosis for each of the mutations”, Joaquima Navarro points out.

The new tool will make it possible to diagnose mutations both directly and indirectly, which increases the level of security of the diagnosis. At the same time, it allows for the chromosomal characterisation within embryos, for the totality of all 23 human chromosome pairs, and detects whether the embryo is aneuploid, with an abnormal number of chromosomes and therefore non-transferable, or euploid, with the correct number and therefore viable and with greater chances of implantation.

The team led by Professor Navarro developed the DF-PGT strategy in 2009. A pioneering technique successfully applied on numerous occasions since then, it consists in analysing within one same IVF cycle the specific genetic mutations causing hereditary diseases, as well as a complete embryonic chromosomal endowment (cytogenetics) through a comparative genomic hybridisation technique. This allows identifying and selecting embryos which are free of the diseases and chromosomal defects hindering their evolution. In 2009, 2013 and 2015, this group was the first ever to use another DF-PGT strategy to select healthy embryos and help different families birth healthy offsprings: twins free of the Von Hippel-Lindau syndrome, twins free of the Lynch syndrome, and two other healthy babies from two families at risk from sickle cell disease and cystic fibrosis, respectively *. On those occasions, the scientists first had to prepare the diagnosis methods of the mutations responsible for the specific genetic disease; whereas in the current strategy proposed, no specific preparation is necessary.

The Next Generation Sequencing (NGS) techniques represent a giant leap forward in the quality of genetic analysis procedures, given that they permit studying millions of DNA sequences massively and simultaneously in one same experiment. These powerful tools are successfully being used for the characterisation of blood and tissue samples, in which the amount of DNA is not a restricting factor.

“The proposed methodology overcomes the limitations existing until now. It was developed to be applied to samples of only 6-8 blastocyst trophoderm cells with the scheduling of a frozen embryo transfer cycle, in the case of the results indicating an absence of family diseases and embryo”, explains Joaquima Navarro.

Before implementing the new platform there was a need to determine which of the four most commonly used DNA amplification systems was most suitable for the adequate identification of mutations. Researchers were thus also the first ever to conduct a chromosomal characterisation with the Nexus computational biology programme by using the TSO database.

“The tool is also of interest in PGTs with risk of chromosomal alterations due to advanced maternal age, alterations found in the father's chromosomes,, as well as in cases of repeated miscarriages. Also in cases of the oocytes of young donors, since a certain risk of aneuploidy has also been described”, the UAB researcher points out.

Researchers are confident that this new methodology will soon be available for use with the TSO panel or by applying it to new, even more complete panels, such as the ones capable of analysing the whole exome or whole genome sequencing. They are also certain that in the middle term it will be applied simultaneously to many samples, thereby reducing its cost.

In addition to researchers from the UAB and the Blood and Tissue Bank of Catalonia, this study included the involvement of specialists from the Vall d'Hebron Research Institute (VHIR), the Puigvert Foundation, the Centro de Investigación en Red de Enfermedades Cardiovasculares (CIBERCV), the Centre de Medicina Embrionària (CME), the Centre d'Infertilitat i Reproducció Humana (CIRH) and the August Pi i Sunyer Biomedical Research Institute (IDIBAPS).

“Our work represents a very important milestone in the line of research we conduct on preimplantation genetic testing. A field in which the UAB was at the forefront globally in the 1980s under the guidance of Professor of Cell Biology Josep Egozcue. We would have loved to share these results with him, he certainly would have been very satisfied”, Joaquima Navarro declares.