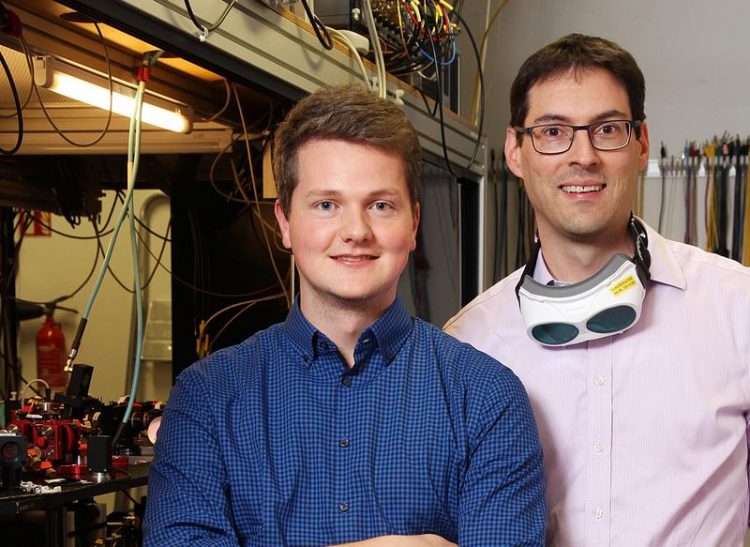 Until a few decades ago it was unthinkable for physicists to carry out experiments with individual atomic particles. Erwin Schrödinger, one of the pioneers of modern quantum theory, expected “ridiculous consequences” from this idea and described it as similarly probable to raising an Ichtyosaurus dinosaur in a zoo.

Physicists around Professor Artur Widera and his doctoral student Felix Schmidt at Technische Universität Kaiserslautern (TUK) are also working on this topic in the Individual Quantum Systems research group. They rely on a so-called Bose-Einstein condensate consisting of rubidium atoms.

“In physics, this refers to a state of matter that is comparable with liquid and gaseous states. However, such a condensate is a perfect quantum mechanical state that behaves like a wave,” says Professor Widera. The condensate is comparable to a gas consisting of very few atoms.

In a recent study, together with Professor Eberhard Tiemann of the Gottfried Wilhelm Leibniz University of Hanover, they investigated the effects of a single caesium atom hitting a rubidium atom. To observe the particles, the researchers must first cool them to temperatures just above absolute zero.

“We then used optical tweezers to bring the atoms into contact with each other,” says Felix Schmidt. During this process, atoms are retained using laser beams. The researchers have now added a single caesium atom to the rubidium gas to measure what happens before and after the collision of the atoms.

The researchers have now observed that atoms can exchange two such angular momentum quanta at the same time in a single impact. So far, only the exchange of a single package (quants) has been observed. “This is only possible because we conducted the experiment in a low magnetic field,” says Schmidt.

Thus, the energy of the atoms is so low that especially the interaction between the individual elements determines the result of the impact. “This makes it possible for two so-called elementary quanta to be transmitted simultaneously, for example for the angular momentum to change twice,” continues the physicist.

But the scientists also observed another effect. “The weak magnetic field and the low kinetic energy result in the atoms interacting with each other a thousand times larger than the atoms themselves, even at a distance,” Schmidt continues.

By changing the strength of the magnetic field, this effect could also be controlled. The effect is directly related to a very large and very weakly bound molecular state between the two particles. “We were able to indirectly observe a huge molecule about two micrometres in size,” said Schmidt.

This knowledge of interaction between particles at very low energies can, for example, help to investigate bonds in molecules. They consist of at least two atoms which are connected by interactions. This would enable, among other things, the preparation and investigation of very large molecules.