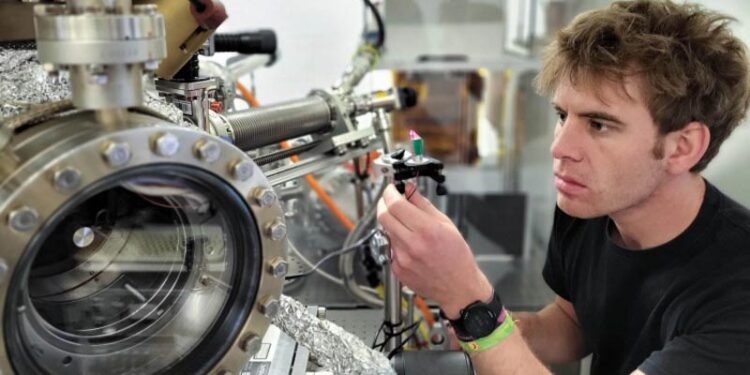 Physicist Paul Möllers prepares the correct positioning of a sample in the vacuum chamber to which the spin polarimeter is connected.
© WWU - Tobias Reiker

A research team from Münster and Pittsburgh first examined chiral oxide catalysts. The results are to help in the future production of spin-selective catalytic oxide materials, thus improving the efficiency of chemical reactions.

Controlling the spin of electrons opens up future scenarios for applications in spin-based electronics (spintronics), for example in data processing. It also presents new opportunities for controlling the selectivity and efficiency of chemical reactions. Researchers recently presented first successes with the example of water splitting for producing “green” hydrogen and oxygen. A joint project involving working groups from the Center for Soft Nanoscience at the University of Münster and from the Institute of Chemistry at the University of Pittsburgh (Pennsylvania, USA; Prof. David Waldeck) now have the task of advancing the systematic development of spin-selective catalyst materials. To this end, the researchers relate the catalytic activity of various inorganic spin-polarising materials to direct measurements of the spin selectivity. The focus is on oxide materials which were purposely grown with a chiral structure. In addition, the researchers also want to investigate the origin of spin polarisation in these chiral materials. The results of an initial study of chiral copper oxide layers have now been published in the “ACS Nano” journal.

The results in brief

The team of German and American researchers first examined chiral oxide catalysts – consisting in this case of thin, chiral copper oxide layers on a thin film of gold. The data measured show that the spin polarisation of the electrons depends on which of these layers the electrons come from. The team considers two effects to be responsible for this: the chirality-induced spin selectivity (CISS) effect and the magnetic arrangement in the chiral layers. The results are to help in the future production of spin-selective catalytic oxide materials, thus improving the efficiency of chemical reactions.

Explaining the background: Why electron spin is relevant is shown in the following example. In fuel cells, hydrogen and oxygen react with each other and form water, with electrical energy being released in the process. The hydrogen may have been previously produced through the reverse process, breaking down water molecules into hydrogen and oxygen. The energy required for this can be provided through electrical power from regenerative sources of energy or directly through sunlight, so that, in future, hydrogen could serve as a source of energy in an energy cycle designed to be CO2-neutral.

What is holding back any large-scale commercialisation of the concept – for example, in electric vehicles running on fuel cells – is, among other things, the low efficiency. A lot of energy has to be used to break down the water molecules, which means that at present it is less expensive to use this energy directly for recharging a car battery. This lower efficiency in breaking down water molecules is a consequence not only of the high overvoltage needed for developing oxygen at the anode of the electrolysis cell, but also of the production of unwanted by-products such as hydrogen peroxide and electronically excited oxygen. Due to their high reactivity, these by-products can also attack the electrode material. Both by-products occur in a so-called singlet state, in which the spins of the electrons involved in the molecular bonds are aligned in antiparallel mode to one another. In the product wanted from the reaction – oxygen in the electronic ground state – this is not the case because it forms a triplet state with spins aligned in parallel, and thus generating only one spin direction helps to arrive at this wanted state of oxygen.

This is a new approach because it involves the spins of the radicals adsorbed on the surfaces of the catalysts, from which the by-products are formed, being aligned in parallel. Such a parallel alignment of the electron spins can be achieved by using a chiral material. In this case, the transfer of electrons through the electrodes as a consequence of the CISS effect, or through the structural change in the oxide, can be spin-selective. In consequence, the formation of molecules in the unwanted singlet state is suppressed and the hydrogen yield is increased.

The current study in detail

In the study now published, lead author Paul Möllers, a PhD student at Münster University, examined chiral copper oxide films with a thickness of just a few nanometres which had previously been electrochemically deposited in a chiral form onto thin gold substrates by researchers from Pittsburgh. UV laser pulses were used to stimulate photoelectrons from the samples and their mean spin polarisation was measured (in a spin polarimeter based on “Mott scattering”). Depending on whether the samples were hit from the oxide-covered front side or from the reverse side, in the process electrons with different energies were emitted from the gold substrate or from the oxide films themselves, in different proportions. By correlating the energy distribution with the spin polarisation values measured, the Münster researchers showed that the electrons from both layers are polarised to different extents.

The electrons from the gold substrate are filtered, as regards their spin, by the CISS effect as they pass through the chiral layer. The electrons from the chiral copper oxide display an opposite spin polarisation, and in the case of films with a thickness of more than 40 nanometres, there is a preponderance of these copper oxide electrons. Additional measurements carried out by the working group led by Prof. Heiko Wende at the Department of Physics at the University of Duisburg-Essen suggest that this reflects a magnetic arrangement in the chiral layers which is not observed in non-chiral oxide films with the same composition.

In order to follow up this hypothesis, the experimental set-up in Münster will be extended by having the possibility of measuring the spin polarisation in electrons depending directly on their energy. Following on from the study now published, further measurements on chiral copper and cobalt oxide films will enable not only a clear differentiation to be made between both polarisation mechanisms, but also chiral inorganic spin-selective catalyst materials to be designed specifically.

The study received financial support from the Volkswagen Foundation (Project No. 96451), as well as from the German Research Foundation, DFG, and the National Science Foundation, NSF, within the framework of the German-American NSF-DFG “Echem” programme (Za 110/30-1) and CHE-2140249 (DHW) and through the NSF project CHE-1900078 (DHW).