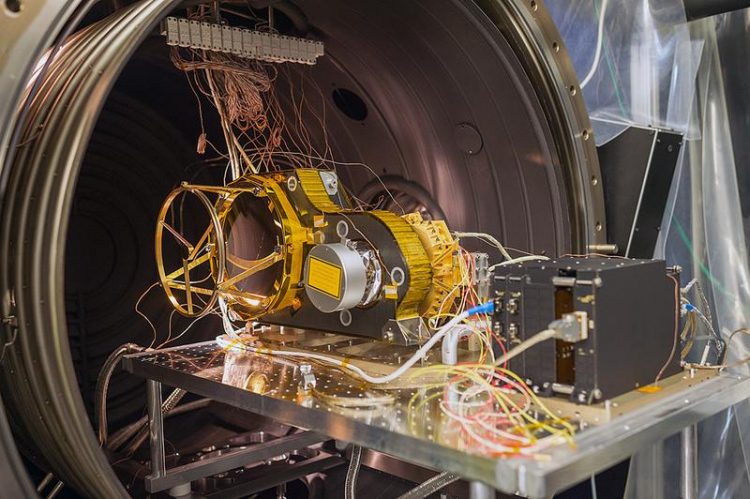 BELA (BepiColombo Laser Altimeter) has been developed by a Swiss-German-Spanish team led by the University of Bern. The instrument is designed to measure the topography of the planet Mercury, from onboard ESA’s space mission, BepiColombo, which is due to launch in April 2018. After an over 80 million kilometer journey, BepiColombo will go into orbit around Mercury in 2024.

«Cameras give us a 2D picture of planet. BELA is designed to give us the third dimension», says Nicolas Thomas, co-Principal Investigator and the hardware leader of the project. BELA uses a high power laser to determine the distance from the spacecraft to the surface of Mercury. Short pulses from an infrared laser are fired at the planet.

The light is reflected from the planet’s surface back to a Swiss-designed ultra-lightweight telescope and the time of flight of the laser pulse is measured. This approach allows BELA to measure the topography of mercury to an accuracy of better than one meter from a distance of 1000 kilometers. Nicolas Thomas puts it more pictorially: «It is a bit like measuring the distance to the North face of the Eiger to one meter accuracy from Hamburg».

«Together with our industrial partners in Switzerland, Germany, and Spain, we have developed a really advanced piece of equipment», says Karsten Seiferlin, the BELA Project Manager. «On Earth, rangefinders are common these days, but putting one in space to range over distances of over 1000 kilometers and weighing under 14 kilograms is extremely challenging.»

The returned pulse is only a few hundred photons, requiring a sophisticated detection scheme. Constructing such a scheme was especially difficult because Mercury is the nearest planet to the Sun and so the team also had to worry about the temperatures which reach around 200 degrees Celsius on the spacecraft outer skin.

However, the huge power consumption of the laser in a very short time ended up being the biggest problem. «This produces noise on the electrical signals. We had to far exceed the requirements normally used for space instruments for grounding the electronics», Nicolas Thomas explains.

«The electronics for BELA required six different organizations to work together. We ended up having to develop several, very new, technical solutions to make the experiment work», says Thomas. «But BELA will contribute a lot to understanding Mercury. Einstein’s studies of the motion of Mercury have been so important to the theory of general relativity. It is nice to think that with this instrument, the University of Bern, where he used to work, can play a leading role in studying this particular planet in detail.»

The BepiColombo mission comprises two spacecraft, the Mercury Planetary Orbiter (MPO) to be built by ESA and the Mercury Magnetospheric Orbiter (MMO) to be built by JAXA. The two spacecraft will fly to Mercury together in a coupled system until reaching Mercury orbit. The MMO will then be released into a 400 km x 19200 km orbit to allow detailed study of the magnetospheric interaction between the planet and the solar wind. The MPO will then descend to a 400 km x 1500 km orbit which is optimum for remote-sensing of the planet's surface.