As clouds fall apart, a new star is born 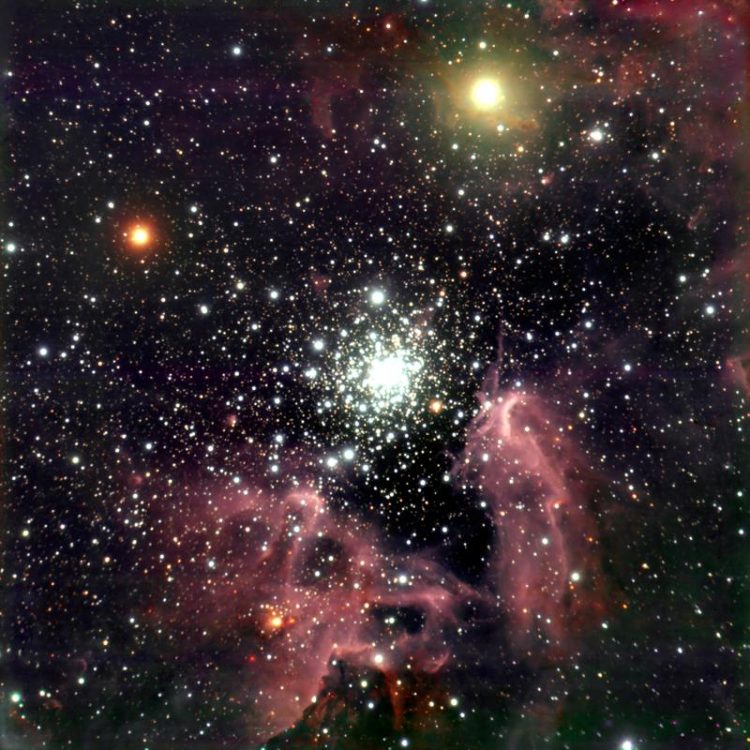 Stars are born when giant clouds of gas and dust collapse. Whenever one of the collapsing regions becomes hot and dense enough for nuclear fusion to set in, a star is born.

For massive stars, i.e. those stars that exhibit more than eight times the mass of the Sun, that is only part of the picture, though. The biggest stars in the Universe are not born singly. They are born from massive clouds of molecular gas, which then form a cascade of fragments, with many of the fragments giving birth to a star.

Astronomers have long wondered whether this fragmentation-mode of forming stars requires different physical mechanisms than for lower-mass stars.

Proposals include turbulent gas motion, which could destabilize a region and lead to quicker collapse, or magnetic fields that could stabilize and thus delay collapse.

The different mechanisms should leave tell-tale traces in regions where multiple stars are forming. The collapse that leads to the formation of high-mass stars takes place on a hierarchy of different levels.

On the largest scales, star formation involves giant molecular clouds, which consist mostly of hydrogen gas and can reach sizes between a few dozen and more than a hundred light-years across.

Within those clouds are slightly denser clumps, typically a few light-years across. Each clump contains one or more dense cores, less than a fifth of a light-year in diameter. Within each core, collapse leads to the formation of either a single star or multiple stars. Together, the stars produced in the cores of a single clump will form a star cluster.

The scales of this fragmentation at multiple levels depend on the mechanisms involved. The simplest model can be written down using no more than high school physics: An ideal gas has a pressure that depends on its temperature and density.

In a simplified gas cloud, assumed to have constant density, that pressure must be strong enough everywhere to balance the force of gravity (given by Newton’s law of gravity) – even in the center of the cloud, where the inward gravitation-induced push of all the surrounding matter is strongest.

Write this condition down, and you will find that any such constant-density cloud can only have a maximum size. If a cloud is larger than this maximum, which is called the Jeans length, the cloud will fragment and collapse.

Is the fragmentation of young massive clusters really dominated by these comparatively straightforward processes? It doesn’t need to be, and some astronomers have constructed much more complex scenarios, which include the influence of turbulent gas motion and magnetic field lines. These additional mechanisms change the conditions for cloud stability, and typically increase the scales of the different types of fragment.

Different predictions for cloud sizes offer a way of testing the simple physics scenario against its more complex competitors. That is what Henrik Beuther and his colleagues set out to do when they observed the star formation region G351.77-0.54 in the Southern constellation Scorpius (The Scorpion).

ALMA takes the most detailed look yet

Beuther and his colleagues were able to do more. They used the ALMA Observatory in the Atacama Desert in Chile. ALMA combines the simultaneous observations of up to 66 radio telescopes to achieve a resolution of down to 20 milli-arcseconds, which allows astronomers to discern details more than ten times smaller than with any previous radio telescope, and at unrivalled sensitivity – a combination that has already led to a number of breakthrough observations also in other fields.

Beuther and his colleagues used ALMA to study the high-mass star-forming region G351.77-0.54 down to sub-core scales smaller than 50 astronomical units (in other words, less than 50 times the average distance between the Earth and the Sun). As Beuther says: “This is a prime example of how technology drives astronomical progress. We could not have obtained our results without the unprecedented spatial resolution and sensitivity of ALMA.”

Their results, together with earlier studies of the same cloud at larger scales, indicate that thermal gas physics is winning the day, even when it comes to very massive stars: Both the sizes of clumps within the cloud and, as the new observations show, of cores within the clumps and even of some core substructures are as predicted by Jeans length calculations, with no need for additional ingredients. Beuther comments:

“In our case, the same physics provides a uniform description. Fragmentation from the largest to the smallest scales seems to be governed by the same physical processes.”

Simplicity is always a boon for scientific descriptions. However, the same observations also provided a discovery that will keep astronomers on their collective toes. In addition to studying fragmentation, Beuther et al. had been looking to unravel the structure of nascent stars (“protostars”) within the cloud. Astronomers expect such a protostar to be surrounded by a swirling disk of gas, called the accretion disk.

From the inner disk of the rim, gas falls onto the growing star, increasing its mass. In addition, magnetic fields produced by the motion of ionized gas and the gas itself interact to produce tightly focused streams called jets, which shoot out some of the matter into space perpendicular to that disk. Submillimeter light from those regions carries tell-tale signs (“Doppler-broadening of spectral lines”) of the motion of dust, which in turn traces the motion of gas.

But where Beuther and his collaborators had hoped for a clear signature from an accretion disk, instead, he found mainly the signature of jets, cutting a comparatively smooth path through the surrounding gas. Evidently, the accretion disks are even smaller than astronomers had expected – a challenge for future observations at even greater spatial resolution.

http://www.mpia.de/news/science/2019-01-MassiveStarformation – Press release of the Max Planck Institute for Astronomy