After 20 years of trying, scientists succeed in doping a 1D chain of cuprates 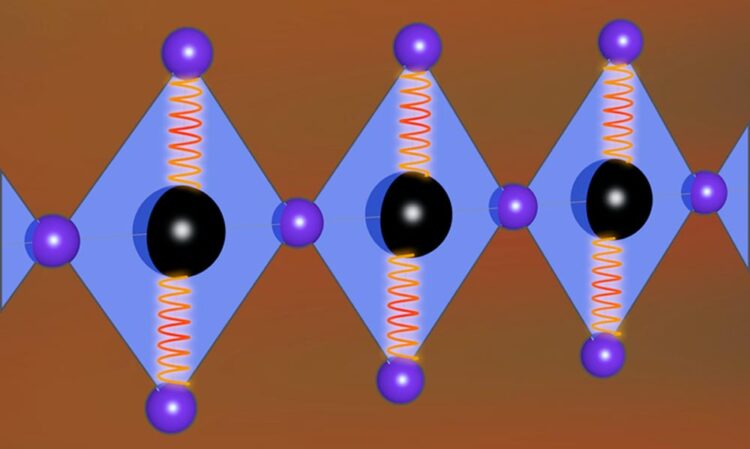 An illustration of 1D copper oxide, or cuprate, chains that have been “doped” to free up some of their electrons in a study led by researchers at SLAC National Accelerator Laboratory and Stanford and Clemson universities. Copper atoms are black and oxygen atoms purple. The red springs represent natural vibrations that jiggle the atomic lattice, which may help produce an unexpectedly strong attraction (not shown) between neighboring electrons in the lattice. This “nearest-neighbor” attraction may play a role in unconventional superconductivity – the ability to conduct electric current with no loss at relatively high temperatures.
Credit: Greg Stewart/SLAC National Accelerator Laboratory

The chemically controlled chains reveal an ultrastrong attraction between electrons that may help cuprate superconductors carry electrical current with no loss at relatively high temperatures.

When scientists study unconventional superconductors – complex materials that conduct electricity with zero loss at relatively high temperatures – they often rely on simplified models to get an understanding of what’s going on.

Researchers know these quantum materials get their abilities from electrons that join forces to form a sort of electron soup. But modeling this process in all its complexity would take far more time and computing power than anyone can imagine having today. So for understanding one key class of unconventional superconductors – copper oxides, or cuprates – researchers created, for simplicity, a theoretical model in which the material exists in just one dimension, as a string of atoms. They made these one-dimensional cuprates in the lab and found that their behavior agreed with the theory pretty well.

Unfortunately, these 1D atomic chains lacked one thing: They could not be doped, a process where some atoms are replaced by others to change the number of electrons that are free to move around. Doping is one of several factors scientists can adjust to tweak the behavior of materials like these, and it’s a critical part of getting them to superconduct.

Now a study led by scientists at the Department of Energy’s SLAC National Accelerator Laboratory and Stanford and Clemson universities has synthesized the first 1D cuprate material that can be doped. Their analysis of the doped material suggests that the most prominent proposed model of how cuprates achieve superconductivity is missing a key ingredient: an unexpectedly strong attraction between neighboring electrons in the material’s atomic structure, or lattice. That attraction, they said, may be the result of interactions with natural lattice vibrations.

The team reported their findings today in Science.

“The inability to controllably dope one-dimensional cuprate systems has been a significant barrier to understanding these materials for more than two decades,” said Zhi-Xun Shen, a Stanford professor and investigator with the Stanford Institute for Materials and Energy Sciences (SIMES) at SLAC.

“Now that we’ve done it,” he said, “our experiments show that our current model misses a very important phenomenon that’s present in the real material.”

Zhuoyu Chen, a postdoctoral researcher in Shen’s lab who led the experimental part of the study, said the research was made possible by a system the team developed for making 1D chains embedded in a 3D material and moving them directly into a chamber at SLAC’s Stanford Synchrotron Radiation Lightsource (SSRL) for analysis with a powerful X-ray beam.

“It’s a unique setup,” he said, “and indispensable for achieving the high-quality data we needed to see these very subtle effects.”

From grids to chains, in theory

The predominant model used to simulate these complex materials is known as the Hubbard model. In its 2D version, it is based on a flat, evenly spaced grid of the simplest possible atoms.

But this basic 2D grid is already too complicated for today’s computers and algorithms to handle, said Thomas Devereaux, a SLAC and Stanford professor and SIMES investigator who supervised the theoretical part of this work. There’s no well-accepted way to make sure the model’s calculations for the material’s physical properties are correct, so if they don’t match experimental results it’s impossible to tell whether the calculations or the theoretical model went wrong.

To solve that problem, scientists have applied the Hubbard model to 1D chains of the simplest possible cuprate lattice – a string of copper and oxygen atoms. This 1D version of the model can accurately calculate and capture the collective behavior of electrons in materials made of undoped 1D chains. But until now, there hasn’t been a way to test the accuracy of its predictions for the doped versions of the chains because no one was able to make them in the lab, despite more than two decades of trying.

“Our major achievement was in synthesizing these doped chains,” Chen said. “We were able to dope them over a very wide range and get systematic data to pin down what we were observing.”

One atomic layer at a time

To make the doped 1D chains, Chen and his colleagues sprayed a film of a cuprate material known as barium strontium copper oxide (BSCO), just a few atomic layers thick, onto a supportive surface inside a sealed chamber at the specially designed SSRL beamline. The shape of the lattices in the film and on the surface lined up in a way that created 1D chains of copper and oxygen embedded in the 3D BSCO material.

They doped the chains by exposing them to ozone and heat, which added oxygen atoms to their atomic lattices, Chen said. Each oxygen atom pulled an electron out of the chain, and those freed-up electrons become more mobile. When millions of these free-flowing electrons come together, they can create the collective state that’s the basis of superconductivity.

Next the researchers shuttled their chains into another part of the beamline for analysis with angle-resolved photoemission spectroscopy, or ARPES. This technique ejected electrons from the chains and measured their direction and energy, giving scientists a detailed and sensitive picture of how the electrons in the material behave.

Their analysis showed that in the doped 1D material, the electrons’ attraction to their counterparts in neighboring lattice sites is 10 times stronger than the Hubbard model predicts,  said Yao Wang, an assistant professor at Clemson University who worked on the theory side of the study.

The research team suggested that this high level of “nearest-neighbor” attraction may stem from interactions with phonons – natural vibrations that jiggle the atomic latticework. Phonons are known to play a role in conventional superconductivity, and there are indications that they could also be involved in a different way in unconventional superconductivity that occurs at much warmer temperatures in materials like the cuprates, although that has not been definitively proven.

The scientists said it’s likely that this strong nearest-neighbor attraction between electrons exists in all the cuprates and could help in understanding superconductivity in the 2D versions of the Hubbard model and its kin, giving scientists a more complete picture of these puzzling materials.