Home / Physics and Astronomy / A new theory for how black holes and neutron stars shine bright
29.11.2019 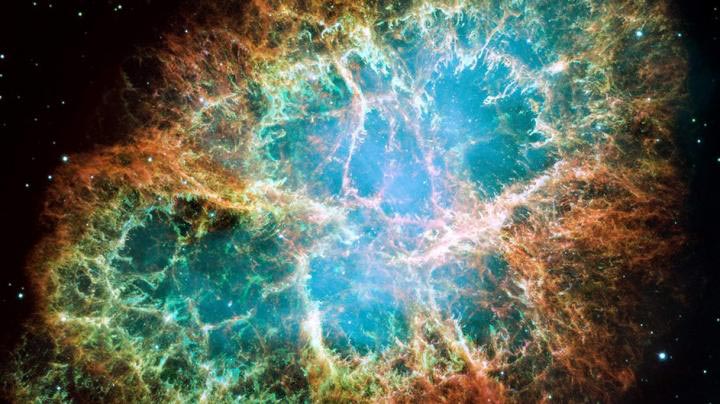 The rapidly spinning neutron star embedded in the center of the Crab nebula is the dynamo powering the nebula's eerie interior bluish glow. The blue light comes from electrons whirling at nearly the speed of light around magnetic field lines from the neutron star. The neutron star, the crushed ultra-dense core of the exploded star, like a lighthouse, ejects twin beams of radiation that appear to pulse 30 times a second. Credit: Image: NASA, ESA, J. Hester (Arizona State University)

For decades, scientists have speculated about the origin of the electromagnetic radiation emitted from celestial regions that host black holes and neutron stars–the most mysterious objects in the universe.

Astrophysicists believe that this high-energy radiation–which makes neutron stars and black holes shine bright–is generated by electrons that move at nearly the speed of light, but the process that accelerates these particles has remained a mystery.

Now, researchers at Columbia University have presented a new explanation for the physics underlying the acceleration of these energetic particles.

In a study published in the December issue of The Astrophysical Journal, astrophysicists Luca Comisso and Lorenzo Sironi employed massive super-computer simulations to calculate the mechanisms that accelerate these particles. They concluded that their energization is a result of the interaction between chaotic motion and reconnection of super-strong magnetic fields.

“Turbulence and magnetic reconnection–a process in which magnetic field lines tear and rapidly reconnect–conspire together to accelerate particles, boosting them to velocities that approach the speed of light,” said Luca Comisso, a postdoctoral research scientist at Columbia and first author on the study.

“The region that hosts black holes and neutron stars is permeated by an extremely hot gas of charged particles, and the magnetic field lines dragged by the chaotic motions of the gas, drive vigorous magnetic reconnection,” he added. “It is thanks to the electric field induced by reconnection and turbulence that particles are accelerated to the most extreme energies, much higher than in the most powerful accelerators on Earth, like the Large Hadron Collider at CERN.”

When studying turbulent gas, scientists cannot predict chaotic motion precisely. Dealing with the mathematics of turbulence is difficult, and it constitutes one of the seven “Millennium Prize” mathematical problems. To tackle this challenge from an astrophysical point of view, Comisso and Sironi designed extensive super-computer simulations –among the world's largest ever done in this research area–to solve the equations that describe the turbulence in a gas of charged particles.

“We used the most precise technique–the particle-in-cell method–for calculating the trajectories of hundreds of billions of charged particles that self-consistently dictate the electromagnetic fields. And it is this electromagnetic field that tells them how to move,” said Sironi, assistant professor of astronomy at Columbia and the study's principal investigator.

Sironi said that the crucial point of the study was to identify role magnetic reconnection plays within the turbulent environment. The simulations showed that reconnection is the key mechanism that selects the particles that will be subsequently accelerated by the turbulent magnetic fields up to the highest energies.

The simulations also revealed that particles gained most of their energy by bouncing randomly at an extremely high speed off the turbulence fluctuations. When the magnetic field is strong, this acceleration mechanism is very rapid. But the strong fields also force the particles to travel in a curved path, and by doing so, they emit electromagnetic radiation.

“This is indeed the radiation emitted around black holes and neutron stars that make them shine, a phenomenon we can observe on Earth,” Sironi said.

The ultimate goal, the researchers said, is to get to know what is really going on in the extreme environment surrounding black holes and neutron stars, which could shed additional light on fundamental physics and improve our understanding of how our Universe works.

They plan to connect their work even more firmly with observations, by comparing their predictions with the electromagnetic spectrum emitted from the Crab Nebula, the most intensely studied bright remnant of a supernova (a star that violently exploded in the year 1054). This will be a stringent test for their theoretical explanation.

“We figured out an important connection between turbulence and magnetic reconnection for accelerating particles, but there is still so much work to be done,” Comisso said. “Advances in this field of research are rarely the contribution of a handful of scientists, but they are the result of a large collaborative effort.”

Other researchers, such as the Plasma Astrophysics group at the University of Colorado Boulder, are making important contributions in this direction, Comisso said.