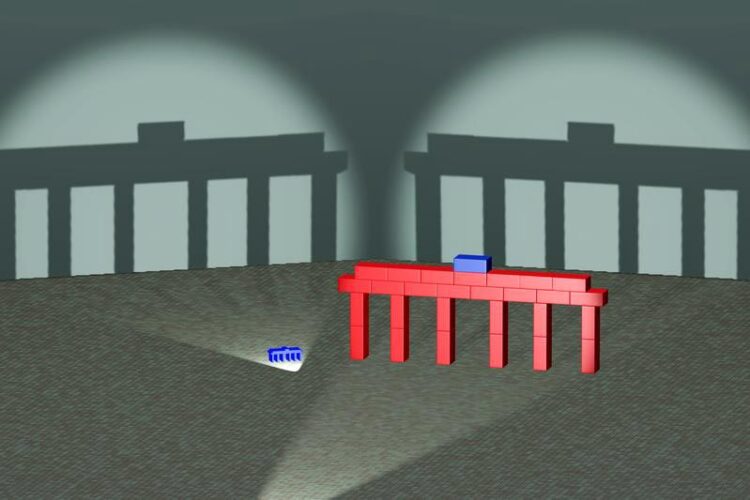 In the restructured equation to describe quantized light-matter interaction, some quantum light is integrated in the matter component from the outset – a bit like carving the Berlin Gate from an individual stone rather than building it block by block.
Jörg Harms/MPSD

When light interacts with matter it can substantially change the behavior of the material. Depending on the form of interaction between light and matter, some chemical reactions appear differently, substances turn magnetic or ferroelectric or begin to conduct electricity without any losses. In particularly thrilling cases, an actual light source may not even be necessary because the mere possibility for light to exist, i.e., its quantum equivalent, the photons, can change the behavior of matter. Theoretical scientists try to describe and predict these fascinating phenomena because they could be crucial in the development of new quantum technologies.

However, calculating quantum light-matter interactions not only eats up enormous amounts of time and computing power – it also becomes very cumbersome. Describing the strong interaction between a realistic material with photons easily consumes thousands of Euros. Now scientists from the Theory Department of the Max Planck Institute for the Structure and Dynamics of Matter (MPSD) in Hamburg have found a way to simplify some of these calculations. Their work, now published in PNAS, provides a significant step towards integrating the quantum nature of light into modern-day devices.

“Imagine you are given a set of construction bricks to build a model of the famous Berlin Gate,” says Christian Schäfer, lead author of the study. “Intuitively, we start placing the stones on top of each other to resemble the shape of the Gate, but with each stone, the construction becomes more unstable and expensive. Similarly, because we sometimes have to consider many hundreds of photons, our calculations can become overwhelmingly complex and the cost of our theoretical predictions spirals very quickly. In fact, this cost is so prohibitive that predicting the full interplay between many photons and realistic molecules is de facto impossible to compute, even on the fastest and biggest existing super-computers.”

Now the MPSD team, based at the Centre for Free-Electron Laser Science (CFEL) in Hamburg, has found a simple but brilliant way to largely circumvent this problem. By reshaping the equation so that already the material-part itself accounts for the quantum mechanical uncertainty of the light, far fewer additional photons are needed to describe the combined system of quantum light and matter.

“In effect, we built the Berlin Gate by carving it from the first stone to arrive at approximately the same result,” explains Schäfer. “This allows us to describe the quantum interaction between light and matter with very little additional cost compared to just considering the material.”

To take an example, when the interaction between light and matter becomes so strong that both systems become truly interlacing, each possible configuration of the light-field can demand the consideration of hundreds of photons. The new approach can capture most features of this extreme limit without the need to consider any photon at all. Adding just a few photons is then enough to provide the full picture.

The method yields considerable savings in computing time and provides a framework for scientists to predict the interplay between quantum light and matter for realistic systems in situations that were prohibitive to simulate. “Our approach can serve as a solid foundation for future developments, providing a path to integrate quantum light more strongly into chemistry, material design and quantum technology,” Schäfer says. “Within the general formalism many novel effects might still await discovery,” adds MPSD Theory director Angel Rubio. “The engineering of materials and molecular complexes through light is becoming a reality. We are embarking on a long and exciting journey to explore its full potential implications in novel quantum technologies and the team’s work provides an important step along this path.”