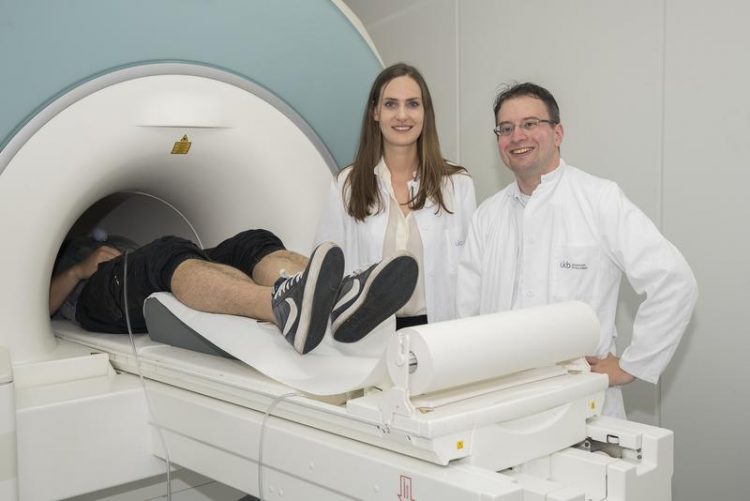 The functional magnetic resonance tomograph records the activity of the brain areas (from left): Mitjan Morr (here only to be seen with feet), Ayline Maier and Dr. Dirk Scheele. (c) Photo: Rolf Müller/UKB

Those who were humiliated, beaten or sexually abused in childhood are more likely to suffer from mental illnesses such as depression or anxiety attacks in adulthood than people who were spared these experiences at a young age. Numerous studies show this. But what are the reasons for this greater vulnerability? Do experiences of violence as a child possibly lead to a permanently changed perception of social stimuli?

Scientists from the Department of Medical Psychology at Bonn University Hospital (UKB) and their colleagues from the Ruhr University Bochum and Chengdu (China) have investigated this question.

The researchers interviewed a total of 120 people about their experiences with violence and accompanying illnesses. A total of 92 adults (64 women) were included in the study. The prerequisite was that the participants neither suffered from neurological diseases nor took medication to exclude these influences.

The scientists tested sensory perception by stroking the naked skin of the shins with one hand with either a fast or a slower movement. “Touch is of central importance because it influences brain development, provides a feeling for one's own body and serves as a stress regulator,” says Dr Dirk Scheele of the UKB's Division of Medical Psychology.

The test subjects lay in the brain scanner during the experiments and could not see the experimenter who performed the movements. His hands were in cotton gloves to avoid direct skin contact.

The recorded thefunctional magnetic resonance imaging system activity of the brain areas. After each measurement, the test persons were asked how comforting the touches were.

The more pronounced the maltreatment experiences during childhood, the more strongly two brain regions reacted to rapid touches. The somatosensory cortex is located in the brain approximately above the ear and registers where a touch occurs. “This area encodes haptic sensations and is involved in the preparation and initiation of body movement – for example, pulling away the leg that has been touched,” says Maier.

The posterior insula cortex is an area deep in the brain behind the temple that is responsible for all body perceptions such as touch, hunger, thirst and pain. Scheele summarizes the result with: “In traumatized people, the activity in these two areas in response to rapid touches is significantly increased”.

The hippocampus, on the other hand, was much weaker activated during slow touches when traumatic experiences had been had in childhood. The brain structure, similar to a seahorse, serves the formation of memory and thus also stores negative and positive associations of stimuli.

“Specifically, the activity of the hippocampus could reflect how rewarding a touch was in the experiment,” explains Maier. More traumatized participants might find a slow and thus more emotionally charged touch less pleasant.

In addition, the scientists investigated the social distance. The participants were asked to walk up to a person they did not know and to stop when the distance was just about perceived as pleasant. It was significantly larger in more severely traumatized people – on average by twelve centimeters.

“The results show that the perception and sensory processing of people with traumatic childhood experiences have changed,” says Scheele, summarizing the results. Touching is less comforting compared to people without maltreatment experience. As control analyses show, it is not the concomitant diseases such as depression or anxiety attacks that are responsible for this, but the traumatization itself. “However, this result may also open up opportunities for new therapies: Supplementary body-based therapies in a safe environment could make it possible to retrain this stimulus processing,” suspects Maier. However, this potential would first have to be investigated in more detail in further studies.