The best of two worlds: Magnetism and Weyl semimetals 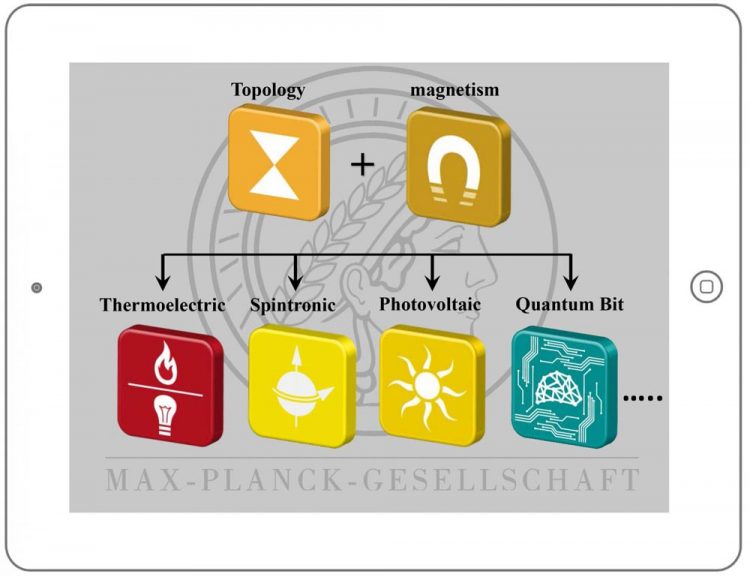 The combination of magnetism and topology leads to new sciences and applications in thermoelectric, spintronic, photovoltaic, quantum computing, and other quantum technologies Credit: MPI CPfS Usage Restrictions: The image may only be used with appropriate caption or credit with the author's consent.

These materials – magnetic Weyl semi-metals – are innately quantum but bridge the two worlds of topology and spintronics. Topological materials exhibit strange properties including super-fast electrons that travel without any energy loss.

On the other hand magnetic materials are essential to our everyday lives from magnets for electric cars to spintronic-devices in every hard disk drive in computers and in the cloud. The concept of a magnetic Weyl semi-metal (WSM) was in the air but a real life material has only just now been realized by the team of Claudia Felser, Director at the MPI CPfS, Dresden, in two very different compounds Co2MnGa and Co3Sn2S2.

To find these extraordinary materials, Felser's team scanned the materials database and came up with a list of promising candidates [1-5]. The proof that these materials are magnetic WSMs was obtained via electronic structure investigations of Co2MnGa and Co3Sn2S2 [6-8]. Scientists from Claudia Felser's group at the MPI CPfS and Stuart Parkin's team at the MPI of Microstructure Physics, Halle, in collaboration with M. Zahid Hasan's team from Princeton, Yulin Chen's team from Oxford University, and Haim Beidenkopf's team from the Weizmann Institute of Science, have experimentally confirmed the existence of magnetic Weyl fermions in these two materials in studies that were published in three papers in Science Magazine today.

For the very first time, using angle-resolved photoemission spectroscopy (ARPES) and scanning tunneling microscope (STM) experiments, time-reversal symmetry broken WSM states were observed, made possible by the high quality single crystals grown at the MPI CPfS. “The discovery of magnetic WSMs is a big step towards the realization of high temperature quantum and spintronic effects.

These two materials, that are members of the highly tunable Heusler and Shandite families, respectively, are ideal platforms for various future applications in spintronic and magneto-optic technologies for data storage, and information processing as well as applications in energy conversion systems,” says Stuart Parkin, the Managing Director of the Max Planck Institute of Microstructure Physics, Halle.

The magnetic topological states in Co2MnGa and Co3Sn2S2 play a crucial role in the origin of the observed anomalous quantum transport effects, due to the strong Berry curvature associated with their topological states. With Weyl nodal line and nodal point band structures, Co2MnGa and Co3Sn2S2 are the only two currently known examples of materials that host both large anomalous Hall conductivity and anomalous Hall angle [3, 4, 6].

“Our materials have the natural advantages of high order temperature, clear topological band structure, low charge carrier density, and strong electromagnetic response. The design of a material that exhibits a high temperature quantum anomalous Hall effect (QAHE) via quantum confinement of a magnetic WSM, and its integration into quantum devices is our next step,” says Claudia Felser.

The discovery of magnetic WSMs is a big step to the realization of a room temperature QAHE and is the basis for new energy conversion concepts “A Quantum Anomalous Hall effect enables dissipationless transport via chiral edge states that are innately spin-polarized.” realized Yan Sun immediately.

Realization of the QAHE at room temperature would be revolutionary by overcoming limitations of many of today's data based technologies, which are affected by large electron scattering-induced power loss. This would pave the way to a new generation of low energy consuming quantum electronic and spintronic devices.

The MPI CPfS is part of the Max Planck Society and was founded in 1995 in Dresden. It consists of around 280 employees, of which about 180 are scientists, including 70 doctoral students.