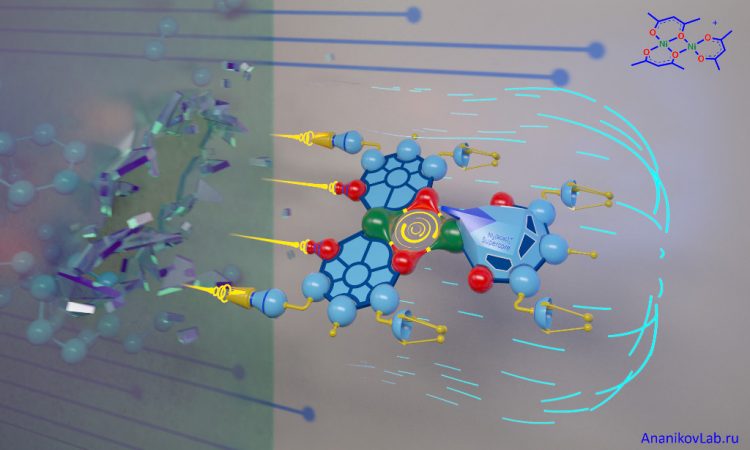 Superatom is a combination of two or more atoms that form a stable structural fragment and possess unique physical and chemical properties. Systems, that contain superatoms, open a number of amazing possibilities for not only formation of new materials, but also for revealing unusual chemical reactivity.

Throughout the chemical transformations process, superatom acts as a single unit and is left unchanged during the reaction. As a result, it would be logical to consider superatoms as elements of periodic table in nanoscale world. Potential area of application of superatoms is quite broad – currently many research directions are explored worldwide in catalysis, material sciences, organometallic chemistry, and medical research.

Modern computations provide a possibility to predict structures that may recognize a “superatom” and even describe some of its properties. However, as far as experiment is concerned, there are currently no universal analytic tools to detect superatoms within complex molecular frameworks.

Scientists of Zelinsky Institute have suggested mass spectrometry as a suitable tool to study superatoms. In the course of the experiment, investigated solution was fed into the ionization chamber of the mass spectrometer through a thin capillary via syringe pump. The solution was further converted into a spray, and compounds were ionized under high voltage and became individually charged particles (Figure 1).

The technique is based on a well-known process that is called electrospray ionization (ESI). Correspondingly, such conditions may induce the formation of particles containing superatomic cores, which are further identified in a collision with nitrogen molecules in the second part of the apparatus. By varying the parameters of the collision, it is possible to estimate the relative stability and to identify the most stable ions.

Extraordinary properties were revealed in the electrospray ionization mass spectrometry experiment, carried out for the solution of simple and well-known nickel salt, namely – nickel(II) acetylacetonate. After a detailed analysis of the obtained spectra, the authors found a surprisingly stable ion Ni2(acac)3+, which contained the Ni2O2 core. During the bombardment of ions by nitrogen molecules (ESI-MS/MS experiment), it was possible to establish a series of relative stability, based on the number of nickel atoms that make up the ion: Ni2 >> Ni3 ≈ Ni1. In a series of experiments an interesting trend of exceptional stability of bimetallic complex compared to mono- and trimetallic complexes was observed.

Unusual chemical processes were revealed upon examination of the metal complex with Ni2O2 core that contains two atoms of nickel and three residues of acetylacetonate. In spite of diverse reactivity and several fragmentation pathways, the principal Ni2O2 core remained unchanged. From the chemical point of view, most important features were found in the reactions occurring as a result of C-C, C-H and C-O bond activation – the key processes in terms of possible applications in organic chemistry and catalysis.

One of the priority targets of modern catalysis is a modification of the organic fragments (coordinated as ligands) that does not affect the active site of the catalyst. Numerous studies have shown that it is not a simple task, because carbon-carbon, carbon-oxygen and carbon-hydrogen bonds in organic fragments are usually stronger (and more difficult to break) compared to the weak donor-acceptor bonds in the coordination complexes.

Formation of superatomic core in such systems gives a chance to totally change established opinions on what organometallic complexes are and how the reactivity can be tuned. New reactivity patterns would allow scientists to exploit new properties of well-known compounds and to solve chemical problems that previously seemed extraordinary.

Results of this study are important in order to understand fundamental principles of superatoms’ chemistry and to develop new catalytic systems for fine organic synthesis. As Prof. Ananikov mentioned: “Nickel complexes are very cheap and easily available. Surprisingly, some nickel complexes have shown superior properties to already known, much more expansive catalysts. We can expect more and more powerful catalytic applications of nickel complexes in the nearest future”.

The first part of this study: “Exceptional Behavior of Ni2O2 Species Revealed by ESI-MS and MS/ MS Studies in Solution. Application of Superatomic Core to Facilitate New Chemical Transformations”, by Dmitry B. Eremin and Valentine P. Ananikov has been published in Organometallics (American Chemical Society).