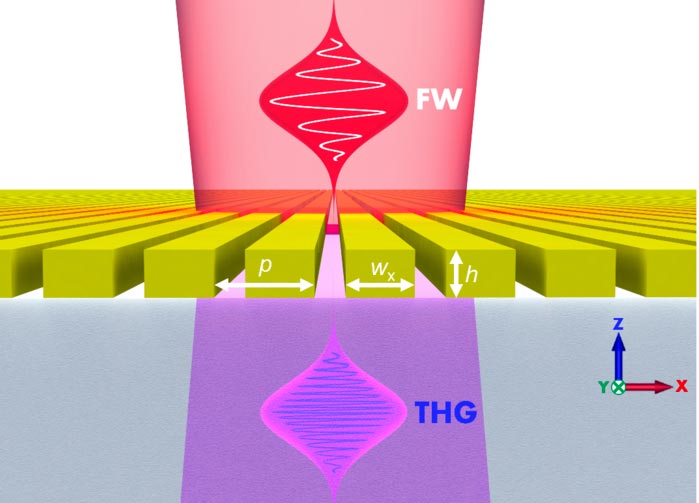 A metasurface made of arsenic trisulfide nanowires (yellow) transmit an incoming near-infrared frequency (red) as well as its third harmonic ultraviolet frequency (violet), which would normally be absorbed by the material.
Credit: Duke University

Electrical engineers at Duke University have discovered that changing the physical shape of a class of materials commonly used in electronics and near- and mid-infrared photonics —chalcogenide glasses— can extend their use into the visible and ultraviolet parts of electromagnetic spectrum. Already commercially used in detectors, lenses and optical fibers, chalcogenide glasses may now find a home in applications such as underwater communications, environmental monitoring and biological imaging.

The results appear online on October 5 in the journal Nature Communications.

As the name implies, chalcogenide glasses contain one or more chalcogens—chemical elements such as sulfur, selenium and tellurium. But there’s one member of the family they leave out: oxygen. Their material properties make them a strong choice for advanced electronic applications such as optical switching, ultra-small direct laser writing (think tiny rewritable CDs) and molecular fingerprinting. But because they strongly absorb wavelengths of light in the visible and ultraviolet parts of electromagnetic spectrum, chalcogenide glasses have long been constrained to the near- and mid-infrared with respect to their applications in photonics.

“Chalcogenides have been used in the near- and mid-IR for a long time, but they’ve always had this fundamental limitation of being lossy at visible and UV wavelengths,” said Natalia Litchinitser, professor of electrical and computer engineering at Duke. “But recent research into how nanostructures affect the way these materials respond to light indicated that there might be a way around these limitations.”

In recent theoretical research into the properties of gallium arsenide (GaAs), a semiconductor commonly used in electronics, Litchinitser’ s collaborators, Michael Scalora of the US Army CCDC Aviation and Missile Center and Maria Vincenti of the University of Brescia predicted that nanostructured GaAs might respond to light differently than its bulk or even thin film counterparts. Because of the way that high intensity optical pulses interact with the nanostructured material, very thin wires of the material lined up next to one another might create higher-order harmonic frequencies (shorter wavelengths) that could travel through them.

Imagine a guitar string that is tuned to resonate at 256 Hertz—otherwise known as middle C. The researchers were proposing that if fabricated just right, this string when plucked might also vibrate at frequencies one or two octaves higher in small amounts.

Litchinitser and her PhD student Jiannan Gao decided to see if the same might be true for chalcogenide glasses. To test the theory, colleagues at the Naval Research Laboratory deposited a 300-nanometer-thin film of arsenic trisulfide onto a glass substrate that was next nanostructured using electron beam lithography and reactive ion etching to produce arsenic trisulfide nanowires of 430 nanometers wide and 625 nanometers apart.

Even though arsenic trisulfide completely absorbs light above 600 THz—roughly the color of cyan—the researchers discovered their nanowires were transmitting tiny signals at 846 THz, which is squarely in the ultraviolet spectrum.

“We found that illuminating a metasurface made of judiciously designed nanowires with near-infrared light resulted in generation and transmission of both the original frequency and its third harmonic, which was very unexpected because the third harmonic falls into the range where the material should be absorbing it,” Litchinitser said.

This counterintuitive result is due to the effect of nonlinear third harmonic generation and its “phase locking” with the original frequency. “The initial pulse traps the third harmonic and sort of tricks the material into letting them both pass through without any absorption,” Litchinitser said.

Moving forward, Litchinitser and her colleagues are working to see if they can engineer different shapes of chalcogenides that can carry these harmonic signals even better than the initial nanostrips. For example, they believe that pairs of long, thin, Lego-like blocks spaced certain distances apart might create a stronger signal at both third and second harmonic frequencies. They also predict that stacking multiple layers of these metasurfaces on top of one another might enhance the effect.

If successful, the approach could unlock a wide range of visible and ultraviolet applications for popular electronic material and mid-infrared photonic materials that have long been shut out of these higher frequencies.