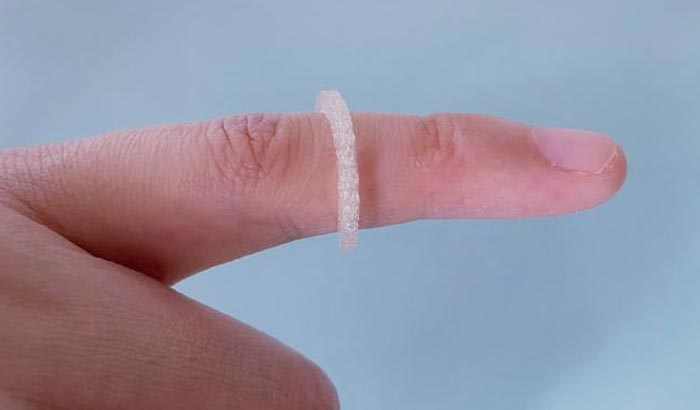 This is what the ring looks like that could help repel insects.
Credit: Uni Halle / Fanfan Du

A new type of insect-repellent delivery device has been developed by scientists from the Martin Luther University Halle-Wittenberg (MLU).

With the help of a 3D printer, the active ingredient is first “encapsulated” and formed into the desired shape, such as a ring, which can then be worn and releases an agent designed to repel mosquitoes for a long time. The team has presented its work in the “International Journal of Pharmaceutics”.

The researchers have developed their prototypes using “IR3535”, an insect repellent developed by MERCK. “Mosquito sprays containing IR3535 are very gentle on the skin and have been used all over the world for many years. That’s why we’ve been using the agent for our experiments”, says Professor René Androsch from the MLU. It is usually applied as a spray or lotion and offers several hours of protection. However, Androsch and his team are looking for ways to release the agent over a much longer period, such as by encapsulating it in a wearable ring or bracelet.

While the researchers have proven that it is absolutely possible to develop a wearable insect repellent, the rings and other forms created for the study are only prototypes. According to Androsch, further research needs to be carried out to determine how well the rings function under actual conditions. The encapsulation material could also be further optimised.

The work was funded by the Deutsche Forschungsgemeinschaft (DFG, German Research Foundation) and within the framework of the graduate school “AGRIPOLY” at MLU. “AGRIPOLY” is funded by the European Social Fund (ESF) and the state of Saxony-Anhalt.