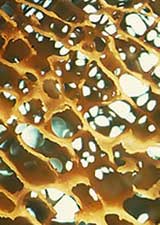 Programmed molecules build themselves into a bone-mimic.

Materials engineers are keen to emulate the strength and toughness of biominerals such as bone, tooth and shell. Mollusc shells, for example, a composite of the mineral calcium carbonate and sheets of organic tissue, are much tougher than an equivalent slab of the mineral alone. So, like a biomineral, the bone-mimic is a blend of hard mineral-like substances and soft organic ones.

Bone is a composite of the calcium-containing mineral hydroxyapatite and the protein collagen, the tough fibrous component of tendons and ligaments. Collagen fibres provide a scaffold on which hydroxyapatite crystals gather, conferring hardness.

Each collagen fibre is itself a delicately wrought cable of several string-like protein molecules. The fibres assemble spontaneously like pre-programmed girders. These hold the hydroxyapatite crystals together and govern the orientation of the stacked sheets of atoms in the crystals, enhancing the material’s strength.

Sam Stupp and colleagues of Northwestern University in Illinois have tailor-made small protein-like molecules called peptides. To each peptide they attached a tail that was insoluble in water, encouraging them to assemble into cylindrical columns with their tails pointing inwards, shielded from water.

These long, flexible columns formed a tangle of worm-like fibres. Stupp’s team fixed the fibres in place by bonding adjacent peptides on their surfaces. Similar bonds link collagen fibres into the connective tissue between cells.

The team also included molecular groups such as those that promote hydroxyapatite crystal formation in natural proteins. Finally, they added groups that make proteins stick to cells. These, they reasoned, would allow the self-assembling web to harbour living cells.

The researchers put this matrix in a solution of ions – primarily calcium and phosphate. Hydroxyapatite crystals grew on the scaffold; their atomic layers aligned with the fibres, just as they do on the collagen scaffold of bone.

Upgrading your computer to quantum