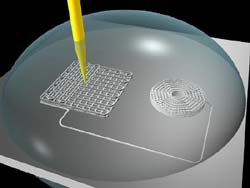 As reported in the March 25 issue of the journal Nature, Jennifer Lewis and her research team have developed novel inks that readily flow through micro-capillary nozzles and then rapidly solidify to retain their shape. Patterning such fine structures could be useful in applications such as drug-delivery, micro-fluidics, photonics and tissue engineering.

“This research builds upon our previous work with colloid-based inks, and represents a major step forward in both ink design and pattern resolution,” said Lewis, a Willett Faculty Scholar and a professor of materials science and engineering and of chemical and biomolecular engineering at Illinois. “Because this new ink is based solely on polyelectrolyte mixtures rather than colloidal particles, we are able to produce three-dimensional periodic structures with feature sizes that are 100 times smaller than before.”

The smallest feature size Lewis’ team has demonstrated so far is 500 nanometers. An entire three-dimensional structure can fit in the diameter of a human hair.

“The new inks are low-viscosity fluids created by combining oppositely charged polyelectrolyte complexes,” Lewis said. “The ink viscosity can be tailored over a wide range to control its flow through fine deposition nozzles of varying diameter.”

A spider creates its web by secreting a concentrated protein solution through its spinneret to produce fine silk filaments. “We drew inspiration from this natural process to guide our ink design,” said graduate student Gregory Gratson, who helped develop the inks. “For example, we worked in a similar concentration range as spider-spinning dope, though our ink structure is significantly less complicated.”

To produce the desired three-dimensional structure, the extruded ink is deposited into a coagulation reservoir containing deionized water and isopropyl alcohol, Gratson said. Solidification of the ink is induced by electrostatic interactions in a water-rich reservoir or by solvent-quality effects in an alcohol-rich reservoir. A careful balance is needed so that the extruded ink filament is elastic enough to maintain its shape while spanning the structure, but flexible enough to adhere to other filaments. Dispensed from a syringe by a computer-controlled, three-axis micropositioner, the polyelectrolyte ink exits the nozzle as a continuous filament that is deposited into a reservoir on the substrate surface, yielding a two-dimensional pattern. After the first layer is generated, the nozzle is raised and another layer is deposited. This process is repeated until the desired three-dimensional structure is produced.

The precisely patterned parts could be used as bio-scaffolds, micro-fluidic networks, sensor arrays or templates for photonic materials.

Graduate student Mingjie Xu is also a co-author of the paper. The U.S. Department of Energy and the U.S. Army Research Office MURI program funded this work.