Doping Buckyballs With Atoms, One at a Time 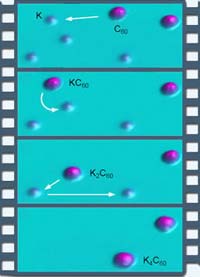 By using the STM’s tip to move a C60 molecule over potassium atoms one at a time, the buckyball can reliably be made to acquire up to four potassium-atom dopants

A team led by Michael Crommie, a staff scientist in Lawrence Berkeley National Laboratory’s Materials Sciences Division and a professor of physics at the University of California at Berkeley, has used a scanning tunneling microscope (STM) to attach individual potassium atoms to isolated carbon-60 molecules.

By adding potassium atoms to familiar soccer-ball-shaped “buckyballs,” Crommie and his coworkers can increase the electric charge on each C60 molecule; individual potassium atoms are either attached or removed from a C60 molecule using the tip of an STM. The method demonstrates that the electronic properties of an individual molecular structure can be reversibly tuned with atomic precision. The researchers report their work in the 12 March 2004 issue of the journal Science.

“Doping materials is a fundamental component of the entire modern electronics industry,” Crommie says, referring to the process of adding impurities like phosphorus or boron to semiconductors like silicon to give the doped material an excess of negatively charged electrons or positively charged holes.

Junctions between n-type and p-type semiconductors are at the heart of the diodes, transistors, integrated circuits, computer chips, and other devices that make possible personal computers, cell phones, CD and DVD players, solar cells, and hundreds of other electronic gadgets. Doping bulk materials is well understood, says Crommie, “but we need to take these techniques and scale them all the way down to the single-molecule level.”

At this level, one or two extra electrons’ worth of charge can affect the performance of critical electronic components. Building a molecular p-type/n-type junction might require electron doping of one molecule and hole doping of another. “With this work we’ve shown how to control the electron doping with absolute precision,” Crommie says.

Crystals and monolayers of buckyballs and other fullerenes have long been doped by introducing metal atoms like potassium or rubidium. Crommie and his colleagues extended the process to the atomic level by depositing widely separated C60 molecules and potassium atoms on the surface of a silver crystal polished to virtually perfect flatness. The samples were prepared in ultrahigh vacuum and cooled in an STM to just seven degrees Kelvin above absolute zero.

In an STM a voltage bias between a fine probe, only a few atoms wide at its tip, and the surface of the sample being investigated causes an electric current to tunnel between them. The strength of the current yields information about the sample’s microscopic shape and electronic structure. And by bringing the tip close enough to attract individual atoms or molecules, they can be moved at will.

Electronic changes were more marked. The added charge donated by the potassium atoms caused the molecular orbital states of the C60 molecule to fill with electrons in a way analogous to the way the conduction band of a semiconductor fills with electrons when it is n-doped. Unlike the potassium-doping of C60 in extended monolayers and bulk crystals, however, where potassium atoms contribute one electron each, here each potassium atom contributed only about 0.6 of an electron’s charge to the individual buckyball.

These results suggest that the potassium atoms collect at the interface where the C60 molecule meets the silver surface, partially hiding from the STM’s probe and sharing part of their charge with the silver substrate.

Until now, controlling the electronic properties of molecular structures in the developing field of nanotechnology (a nanometer is one billionth of a meter) usually involved having chemists synthesize new starting materials in a test-tube or “gating” the structure — i.e., influencing the electronic environment with nearby electrodes. The new work offers a third way, with the major advantage of flexibility.

“If you want molecular structures to jump up and dance, the name of the game is control,” says Crommie. “Tunability is the key to tailoring the electronic properties of individual molecules. We have demonstrated that we can do this in situ in a controllable, reversible way.”

The Berkeley Lab is a U.S. Department of Energy national laboratory located in Berkeley, California. It conducts unclassified scientific research and is managed by the University of California. Visit our website at http://www.lbl.gov.