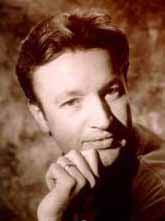 Engineers at Ohio State University and their colleagues have taken an unprecedented look at the interface between layers of silicon and other materials in electronic devices.

What they have learned may help traditional microelectronics remain vital to industry longer than most experts expect. It may even aid the design of other devices where one material meets another — including medical implants.

Using computer simulation, the engineers demonstrated for the first time how a previously known means of creating thin films of materials – a process known as “snowplowing” — actually works. The results suggest that snowplowing could be used in a new way to create high-quality electronics, said Wolfgang Windl, professor of materials science and engineering at Ohio State.

They have also viewed — again, for the first time — a perfect interface between layers of the common semiconductor materials germanium and silicon dioxide. Known as an “atomically sharp” interface, such a perfect interface could be used to boost the speed of computer chips.

As computer chip makers continue to build more and more circuits onto every chip, traditional silicon electronics are quickly approaching a limit beyond which enhancements in speed and efficiency will no longer be possible, Windl explained.

Engineers across the industry are scrambling to develop new technologies that will be ready to replace silicon before that limit is reached. Windl’s research group is trying to buy them more time.

“Our goal is to keep traditional devices useful for a few more years,” he said. “We want to squeeze all we can out of the technology.”

The engineers combined materials data with computer simulation to gain new insight into atomic-level interactions at the interface between silicon and other materials.

Tao Liang, a doctoral student at Ohio State, presented the results in a poster session December 1 at the Materials Research Society meeting in Boston. Coauthors on the poster include engineers Sergei Lopatin and Gerd Duscher, both of North Carolina State University and Oak Ridge National Laboratory.

This research grew out of a coincidence: Windl and Duscher grew up on the same street in Germany, and they recently ran into each other in the United States.

“We hadn’t seen each other since we were children,” Windl said, smiling. “When we discovered that we were working in similar areas, we knew we had to do something together.”

As a leading electron microscopist, Duscher could view and often identify individual atoms in materials, but he needed someone to interpret his data. Windl could provide that interpretation through his computer simulations, but he lacked the data to show whether his simulations reflected true material behavior.

“It was a match made in heaven,” Windl said.

At Oak Ridge, Duscher recently found 15-year-old materials samples that had been produced by colleague Dariush Fathy and co-workers, containing a layered structure of silicon, germanium and silicon dioxide. Since Windl and Duscher’s new collaboration included studying such samples, Duscher examined the structure with the electron microscope.

After comparing the data to their computer simulations, Windl and Duscher found to their surprise that the interface between the germanium and silicon dioxide was perfect down to the atom — a condition known as “atomically sharp,” which to Windl’s knowledge had never been seen before in semiconductor devices.

Such an ideal interface is highly desirable, Windl explained, because it increases the speed of computer chips.

“Semiconductor companies have put considerable effort into making the interface as sharp as possible, without ever reaching the ultimate limit — which unknowingly had existed for 15 years in a sample in a box in the corner of a lab at Oak Ridge,” Windl said.

After they used the data to develop accurate models of how silicon, oxygen, and germanium atoms interact, they also tried something else: they modeled “snowplowing,” a technique for creating a thin film of a material. This technique had been used to create the sample in the study.

Snowplowing exploits incompatibility between atoms, in this case between germanium and oxygen. Given a piece of material made of silicon and germanium, engineers add oxygen from the top, which penetrates into the material to form silicon dioxide. Since oxygen repels the germanium atoms, it literally pushes them down into the silicon. A layer of germanium becomes densely packed within the silicon, like a pile of snow ahead of a snowplow. Oxygen in turn cannot penetrate into the germanium pile, and so the separation between oxide and germanium becomes as sharp as possible, without any mixing around the interface.

One unexplained effect of snowplowing is that some germanium atoms escape the snowplow and emerge within the silicon dioxide.

The computer simulation clearly showed how this can happen. When the germanium atoms become too crowded in front of the snowplowing oxide layer, some atoms can’t fit, and they are left behind.

“It’s like they fall over the upper edge of the snow shovel,” Windl said.

The germanium in the oxide is in principle bad for the electronic properties of the material, but Windl suspects that chip manufacturers can now use this knowledge to create high-quality layered materials.

Windl said engineers can use virtual tools like his models to test out new material “recipes” much more quickly than they could otherwise. From his days of creating computer models for electronics maker Motorola, Inc., Windl knows that a prototype material can take months to create, before testing can even begin. In contrast, a computer model can tell designers what they need to know in days or even hours.

That faster pace for innovation, plus the increased knowledge of material behavior at interfaces, could help electronics manufacturers get all the performance they can out of silicon chips, Windl said.

The same combination of modeling techniques and electron microscopy could also work for many other applications where material interfaces are important. One application would be medical implants, such as the titanium-coated joint replacements that contact bone in the body.

This research was funded by the Semiconductor Research Corp.

Less innocent than it looks