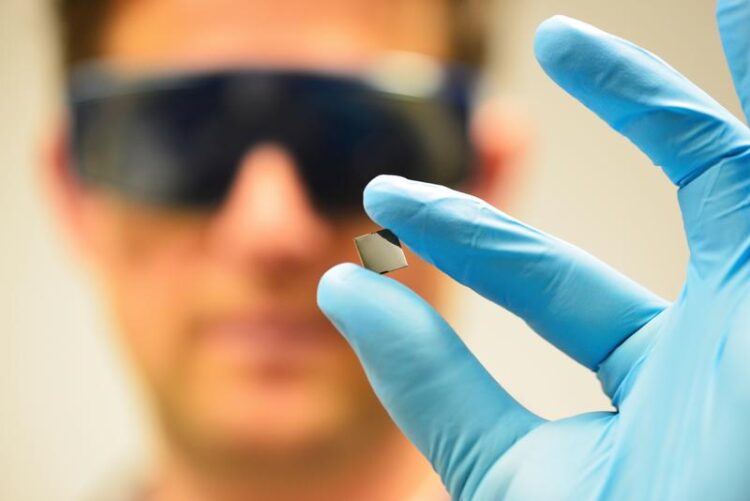 Electrochemical reactions, which will play an important role in the future of energy supply, can now be explained in detail, thanks to measurements carried out by TU Wien and DESY.

Electrochemistry is playing an increasingly important role: Whether it is fuel cells, electrolysis or chemical energy storage, chemical reactions controlled by electric current are used. The decisive factor in all these applications is that the reactions are as fast and efficient as possible.

An important step forward has now been taken by a team from TU Wien (Vienna) and DESY in Hamburg: They showed that a special material made of lanthanum, strontium, iron and oxygen can be switched back and forth between two different states: In one state the material is catalytically extremely active, in the other less so. The reason for this is the behavior of tiny iron nanoparticles on the surface, which has now been demonstrated in experiments at the German Electron Synchrotron DESY in Hamburg. This finding should now make it possible to develop even better catalysts. The result has been published in the journal “Nature Communications”.

“We have been using perovskites for our electrochemical experiments for years,” says Prof. Alexander Opitz from the Institute of Chemical Technologies and Analytics. “Perovskites are a very diverse class of materials, some of them are excellent catalysts.” The surface of the perovskites can help to bring certain reactants into contact with each other – or to separate them again. “Above all, perovskites have the advantage that they are permeable to oxygen ions. Therefore, they can conduct electric current, and we are taking advantage of this,” explains Alexander Opitz.

When an electrical voltage is applied to the perovskite, oxygen ions are released from their place within the crystal and start to migrate through the material. If the voltage exceeds a certain value, this leads to iron atoms in the perovskite migrating as well. They move to the surface and form tiny particles there, with a diameter of only a few nanometers. Essentially, these nanoparticles are excellent catalysts.

“The interesting thing is that if one reverses the electric voltage, the catalytic activity decreases again. And so far the reason for this was unclear,” says Alexander Opitz. “Some people suspected that the iron atoms would simply migrate back into the crystal, but that’s not true. When the effect takes place, the iron atoms do not have to leave their place on the material surface at all.”

Analysis with X-rays at DESY

The research team at TU Wien collaborated with a team at the Electron Synchrotron in Hamburg (DESY) to precisely analyze the structure of the nanoparticles with X-rays while the chemical processes take place. It turned out that the nanoparticles change back and forth between two different states – depending on the voltage applied: “We can switch the iron particles between a metallic and an oxidic state,” says Alexander Opitz. The applied voltage determines whether the oxygen ions in the material are pumped towards the iron nanoparticles or away from them. This allows to control how much oxygen is contained in the nanoparticles, and depending on the amount of oxygen, the nanoparticles can form two different structures – an oxygen-rich one, with low catalytic activity, and an oxygen-poor, i.e. metallic one, which is catalytically very active.

“This is a very important finding for us,” says Alexander Opitz. “If the switching between the two states were caused by the iron atoms of the nanoparticle diffusing back into the crystal, very high temperatures would be needed to make this process run efficiently. Now that we understand that the activity change is not related to the diffusion of iron atoms but to the change between two different crystal structures, we also know that comparatively low temperatures can be sufficient. This makes this type of catalyst even more interesting because it can potentially be used to accelerate technologically relevant reactions.

From hydrogen to energy storage

This catalytic mechanism is now to be further investigated, also for materials with slightly different compositions. It could increase the efficiency of many applications. “This is particularly interesting for chemical reactions that are important in the energy sector,” says Alexander Opitz. “For example, when it comes to the production of hydrogen or synthesis gas, or to energy storage by producing fuel with electric current.”