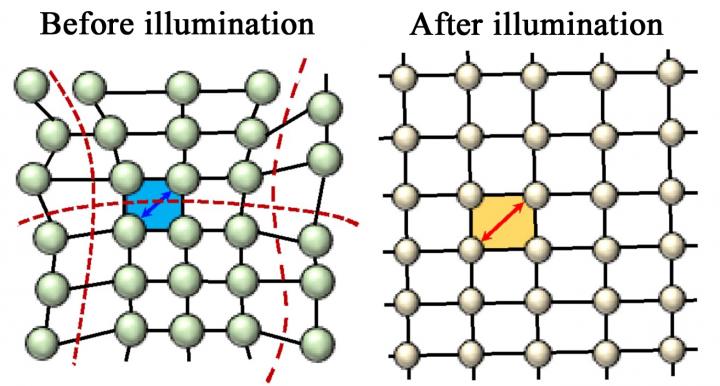 Constant illumination was found to relax the lattice of a perovskite-like material, making it more efficient at collecting sunlight and converting it to energy. The stable material was tested for solar cell use by scientists at Rice University and Los Alamos National Laboratory. Credit: Light to Energy Team/Los Alamos National Laboratory Usage Restrictions:For news reporting purposes only.

Some materials are like people. Let them relax in the sun for a little while and they perform a lot better.

A collaboration led by Rice University and Los Alamos National Laboratory found that to be the case with a perovskite compound touted as an efficient material to collect sunlight and convert it into energy.

Expansion aligns the material's crystal planes and cures defects in the bulk. That in turn reduces energetic barriers at the contacts, making it easier for electrons to move through the system and deliver energy to devices.

This not only improves the power conversion efficiency of the solar cell, but also does not compromise its photostability, with negligible degradation over more than 1,500 hours of operation under continuous one-sun illumination of 100 milliwatts per cubic centimeter.

The research, which appears this week in Science, represents a significant step toward stable perovskite-based solar cells for next generation solar-to-electricity and solar-to-fuel technologies, according to the researchers.

“Hybrid perovskite crystal structures have a general formula of AMX3, where A is a cation, M is a divalent metal and X is a halide,” Mohite said. “It's a polar semiconductor with a direct band gap similar to that of gallium arsenide.

“This endows perovskites with an absorption coefficient that is nearly an order of magnitude larger than gallium arsenide (a common semiconductor in solar cells) across the entire solar spectrum,” he said. “This implies that a 300-nanometer thick film of perovskites is sufficient to absorb all the incident sunlight. By contrast, silicon is an indirect band gap material that requires 1,000 times more material to absorb the same amount of sunlight.”

Mohite said researchers have long sought efficient hybrid perovskites that are stable in sunlight and under ambient environmental conditions.

“Through this work, we demonstrated significant progress in achieving both of these objectives,” he said. “Our triple-cation-based perovskite in a cubic lattice shows excellent temperature stability at more than 100 degrees Celsius (212 degrees Fahrenheit).”

The researchers modeled and made more than 30 semiconducting, iodide-based thin films with perovskite-like structures: Crystalline cubes with atoms arranged in regular rows and columns. They measured their ability to transmit current and found that when soaked with light, the energetic barrier between the perovskite and the electrodes largely vanished as the bonds between atoms relaxed.

They were surprised to see that the barrier remained quenched for 30 minutes after the light was turned off. Because the films were kept at a constant temperature during the experiments, the researchers were also able to eliminate heat as a possible cause of the lattice expansion.

Measurements showed the “champion” hybrid perovskite device increased its power conversion efficiency from 18.5 percent to 20.5 percent. On average, all the cells had a raised efficiency above 19 percent. Mohite said perovskites used in the study were 7 percent away from the maximum possible efficiency for a single-junction solar cell.

He said the cells' efficiency was nearly double that of all other solution-processed photovoltaic technologies and 5 percent lower than that of commercial silicon-based photovoltaics. They retained 85 percent of their peak efficiency after 800 hours of continuous operation at the maximum power point, and their current density showed no photo-induced degradation over the entire 1,500 hours.

“This work will accelerate the scientific understanding required to achieve perovskite solar cells that are stable,” Mohite said. “It also opens new directions for discovering phases and emergent behaviors that arise from the dynamical structural nature, or softness, of the perovskite lattice.”

The lead researchers indicated the study goes beyond photovoltaics as it connects, for the first time, light-triggered structural dynamics with fundamental electronic transport processes. They anticipate it will lead to technologies that exploit light, force or other external triggers to tailor the properties of perovskite-based materials.

Co-authors of the paper are research scientist Bo Chen, Rafael Verduzco, an associate professor of chemical and biomolecular engineering and of materials science and nanoengineering, and Pulickel Ajayan, chair of the Department of Materials Science and NanoEngineering, the Benjamin M. and Mary Greenwood Anderson Professor in Engineering and a professor of chemistry, all of Rice; graduate student Reza Asadpour and Muhammad Ashraf Alam, the Jai N. Gupta Professor of Electrical and Computer Engineering, of Purdue University; research scientists Jean-Christophe Blancon, Sergei Tretiak and Wanyi Nie of Los Alamos; research assistant professor Constantinos Stoumpos and Mercouri Kanatzidis, the Charles E. and Emma H. Morrison Professor of Chemistry at Northwestern University; Jacky Even and Olivier Durand, professors of physics at the Institute of Electronics and Telecommunications of Rennes, France, and Joseph Strzalka, a physicist at Argonne National Laboratory.

This work was supported by the Department of Energy's Office of Energy Efficiency and Renewable Energy and its Basic Energy Sciences office.

This news release can be found online at http://news.rice.edu/2018/04/05/light-relaxes-crystal-to-boost-solar-cell-efficiency/