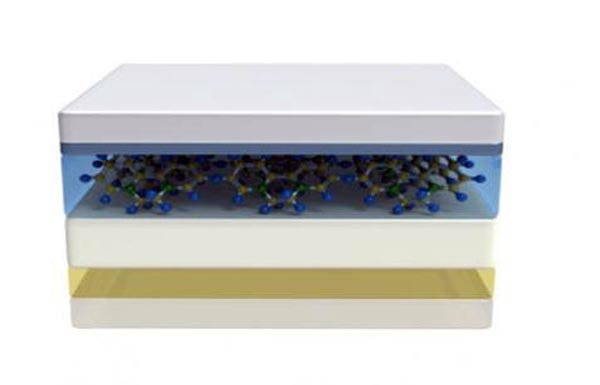 Understanding how particles travel through a device is vital for improving the efficiency of solar cells. Researchers from KAUST, working with an international team of scientists, have now developed a set of design guidelines for enhancing the performance of molecular materials.

When a packet of light, or photon, is absorbed by a semiconductor, it generates a pair of particles known as an exciton. An electron is one part of this pair; the other is its positively charged equivalent, called a hole. Excitons are electrically neutral, so it is impossible to set them in motion by applying an electric field. Instead the excitons “hop” by a random motion or diffusion. The dissociation of the excitons into charges is necessary to create a current but is highly improbable in an organic semiconductor.

“So typically, we need to blend two semiconductors, a so-called electron donor and an electron acceptor, to efficiently generate free charges,” explains Yuliar Firdaus. “The donor and acceptor materials penetrate into one another; maximizing the exciton diffusion length– the distance the exciton can travel before recombining and being lost– is crucial for optimizing the organic solar cell’s performance.

Many previous organic solar cells were made by blending a polymer with molecules, known as fullerenes. But more recently, replacing the fullerene with other organic materials such as nonfullerene small molecules produced impressive improvements in device efficiency.

Firdaus and colleagues combined measurements of the photocurrent with ultrafast spectroscopy to calculate the diffusion length of a wide variety of nonfullerene molecules. They observed very long exciton diffusion lengths, in the range of 20 to 47 nanometers–an improvement on the 5 to 10 nanometer range characteristic of fullerenes.

To better understand this improvement, the team compared data describing the crystallographic structure of the molecules with quantum chemical calculations. In this way they could identify key relationships between the chemical structure of the molecule and the diffusion length. With these connections established, the scientists developed a set of rules to aid in the synthesis of improved materials and, ultimately, help the design of organic photovoltaic devices with improved conversion efficiency.

“Next, we plan to investigate how film processing processes might affect the exciton transfer rate of the existing small-molecule acceptors,” says Firdaus. “We are also interested in translating the molecular design rules to synthesize new acceptor materials with better performance.”