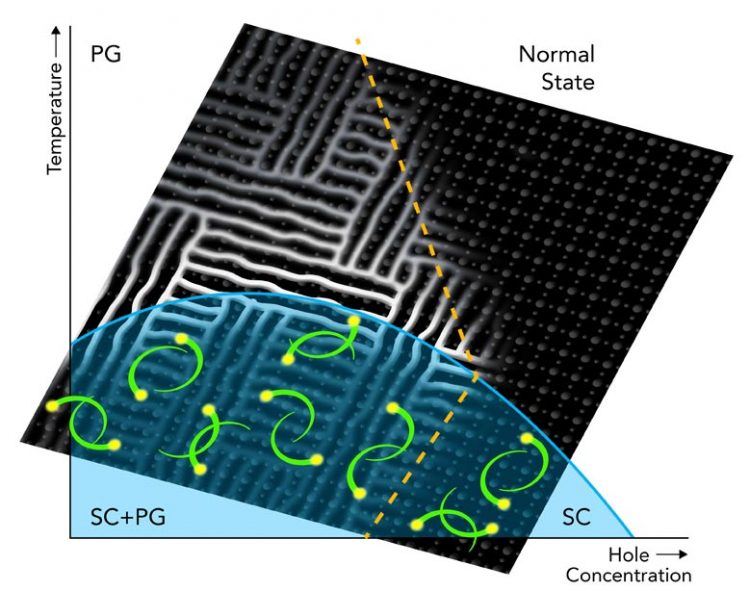 SLAC National Accelerator Laboratory This illustration shows the complex relationship between high-temperature superconductivity (SC) and a mysterious phase called the pseudogap (PG). Copper oxide materials become superconducting when an optimal number of electrons are removed, leaving positively charged “holes,” and the material is chilled below a transition temperature (blue curve). This causes remaining electrons (yellow) to pair up and conduct electricity with 100 percent efficiency. Experiments at SLAC have produced the first direct evidence that the pseudogap competes for electrons with superconductivity over a wide range of temperatures at lower hole concentrations (SC+PG). At lower temperatures and higher hole concentrations, superconductivity wins out.

Scientists have found the first direct evidence that a mysterious phase of matter known as the “pseudogap” competes with high-temperature superconductivity, robbing it of electrons that otherwise might pair up to carry current through a material with 100 percent efficiency.

The result, led by researchers at Stanford University and the Department of Energy’s SLAC National Accelerator Laboratory, is the culmination of 20 years of research aimed at finding out whether the pseudogap helps or hinders superconductivity, which could transform society by making electrical transmission, computing and other areas much more energy efficient.

The new study definitively shows that the pseudogap is one of the things that stands in the way of getting superconductors to work at higher temperatures for everyday uses, said lead author Makoto Hashimoto, a staff scientist at SLAC’s Stanford Synchrotron Radiation Lightsource (SSRL), the DOE Office of Science User Facility where the experiments were carried out. The results were published in Nature Materials.

“Now we have clear, smoking-gun evidence that the pseudogap phase competes with and suppresses superconductivity,” Hashimoto said. “If we can somehow remove this competition, or handle it better, we may be able to raise the operating temperatures of these superconductors.”

In the experiments, researchers used a technique called angle-resolved photoemission spectroscopy, or ARPES, to knock electrons out of a copper oxide material, one of a handful of materials that superconduct at relatively high temperatures – although they still have to be chilled to at least minus 135 degrees Celsius.

Plotting the energies and momenta of the ejected electrons tells researchers how they were behaving when they were inside the material. In metals, for instance, electrons freely flow around and between atoms. In insulators, they stick close to their home atoms. And in superconductors, electrons leave their usual positions and pair up to conduct electricity with zero resistance and 100 percent efficiency; the missing electrons leave a characteristic gap in the researchers’ plots.

“It’s a complex, intimate relationship. These two phenomena likely share the same roots but are ultimately antagonistic,” said Zhi-Xun Shen, a professor at SLAC and Stanford and senior author of the study. “When the pseudogap is winning, superconductivity is losing ground.”

Shen and his colleagues have been using ARPES to investigate the pseudogap ever since it showed up, refining their techniques over the years to pry more information out of the flying electrons.

In this latest study, Hashimoto was able to find out exactly what was happening at the moment the material transitioned into a superconducting state. He did this by measuring not only the energies and momenta of the electrons, but the number of electrons coming out of the material with particular energies over a wide range of temperatures, and after the electronic properties of the material had been altered in various ways.

He discovered clear, strong evidence that at this crucial transition temperature, the pseudogap and superconductivity are competing for electrons. Theoretical calculations by members of the team were able to reproduce this complex relationship.

Scientists still don’t know what causes the pseudogap, Devereaux said: “This remains one of the most important questions in the field, because it’s clearly preventing superconductors from working at even higher temperatures, and we don’t know why.”

But the results pave new directions for further research, the scientists said.

“Now we can model the competition between the pseudogap and superconductivity from the theoretical side, which was not possible before,” Hashimoto said. “We can use simulations to reproduce the kinds of features we have seen, and change the variables within those simulations to try to pin down what the pseudogap is.”

He added, “Competition may be only one aspect of the relationship between the two states. There may be more profound questions – for example, whether the pseudogap is necessary for superconductivity to occur.”

In addition to SLAC and Stanford, researchers from Lawrence Berkeley National Laboratory, Osaka University, the National Institute of Advanced Industrial Science and Technology in Japan, the Japan Atomic Energy Agency, Tokyo Institute of Technology, University of Tokyo and Cornell University contributed to the study. The research was supported by the DOE Office of Science.

SLAC National Accelerator Laboratory is supported by the Office of Science of the U.S. Department of Energy. The Office of Science is the single largest supporter of basic research in the physical sciences in the United States, and is working to address some of the most pressing challenges of our time.