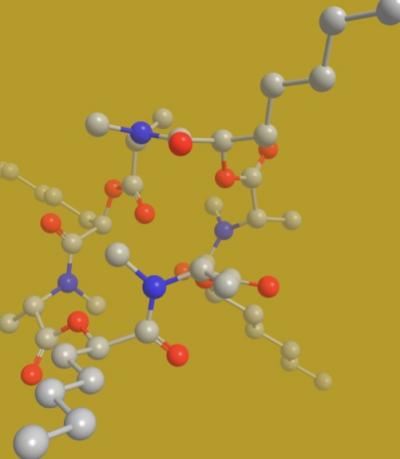 One problem, however, has been the difficulty of chemically synthesizing these biomolecules, particularly in larger ring-sizes. Current methods require a large number of chemical steps, each of which increases the time required and reduces the yield of the final product.

Now a pair of chemists — Stevenson Professor of Chemistry Jeffrey Johnston and doctoral student Suzanne Batiste from the department of chemistry and Institute of Chemical Biology at Vanderbilt University — have developed a method that produces cyclic depsipeptides in a single step with high yields and in unusually large sizes, ranging up to rings with 60 atoms.

They describe the new process in a paper titled “Rapid Synthesis of Cyclic Oligomeric Depsipeptides with Positional, Stereochemical and Macrocycle Size-Distribution Control” published this week in the online early edition of the Proceedings of the National Academy of Sciences.

“I don't know of any chemist who wouldn't take a single-step synthesis over one that takes multiple steps,” said Johnston.

The Vanderbilt researchers achieved this result by adapting a standard tool in the synthetic organic chemist's toolbox called the “Mitsunobu reaction.” Normally, this reaction is used to make one carbon-oxygen bond at a time. Johnston and Batiste modified it so it could be used to stitch monomers – small molecules that link to form molecular chains called oligomers — together and then bind the ends together to form rings.

The new method enables them to make rings in unusual and much larger sizes than those found in nature and to do so all in a single step.

Once they have synthesized the basic monomer, using others with different chemical units, called decorations, to produce a variety of different bioactive molecules is relatively straightforward.

In addition, the chemists found that they could control the size of the rings being formed by adding different salts to their recipe.

For example, addition of salt sodium tetrafluoroborate tailored the reaction to produce only 24-atom rings. (This is the basic ring structure of the pesticide verticilide that normally requires 14 steps overall to synthesize, but now can be created in only six!) Similarly, the addition of the salt potassium tetrafluoroborate doubles the amount of 36-atom rings, while adding cesium chloride triples the amount of 60-atom rings produced from a single reaction.

The combination of their chemical make-up and ring structure account for cyclic depsipeptides' biological activity. They can be tailor-made to attach to specific receptors on cell surfaces. Receptors are large proteins with one end on the surface of a cell's outer membrane that respond to the presence of specific molecules in the cell's environment and trigger specific biochemical reactions within the cell. By capping a receptor's outer end, cyclic depsipeptides can either block the receptor or trigger it, depending on how they are designed. For example, verticilide blocks the activity of the ryanodine receptor, which controls the concentration of calcium ions within the cell, in insects but not in mammals.

“There is speculation that large depsipeptide rings may exhibit unique biological properties but efforts to explore this are in the very early stages,” said Johnston. “Our new process will help open this new chemical space.”