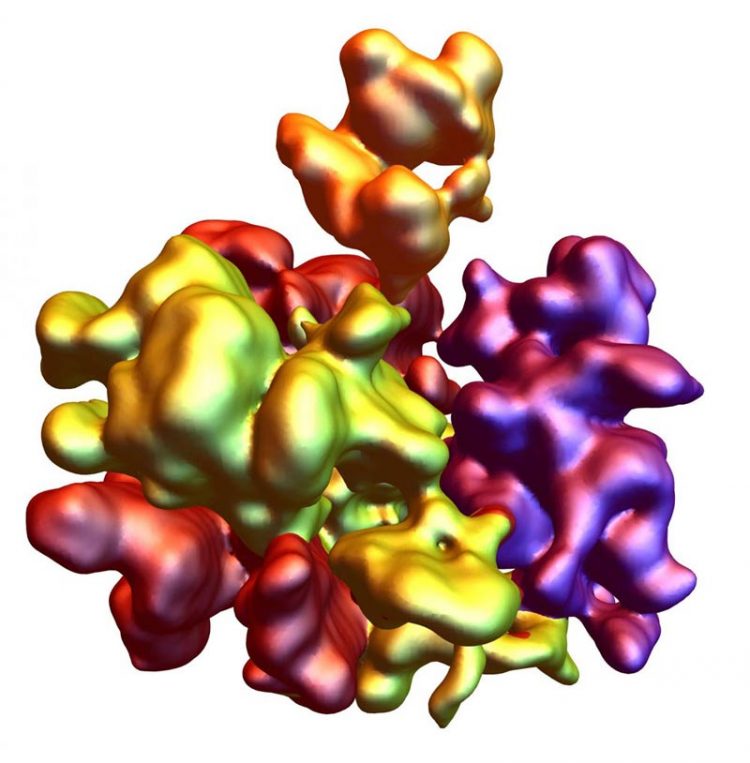 Figure illustrates puddles of localized quasi-condensates found using a quantum Monte Carlo simulation of trapped atoms in a disordered lattice. Individual puddles, consisting of 10-20 particles each, are incoherent relative to each other. The Bose glass is composed of these puddle-like structures. Credit: Ushnish Ray, University of Illinois

“This result was a fantastic collaboration between theory and experiment,” explained Physics Professor Brian DeMarco, whose group led the experimental phase of the study.

“One of the grandest and most impactful frontiers of physics is the quantum many-particle problem. We do not understand very well what happens when many quantum particles come together and interact with each other. This problem spans some of the largest scales in the universe, like understanding the nuclear matter in neutron stars, to the smallest, such as electron transport in photosynthesis and the quarks and gluons inside a proton.”

DeMarco's group experiments with atoms gases cooled to just billionths of a degree above absolute zero temperature in order to experimentally simulate models of materials such as high-temperature superconductors. In these experiments, the atoms play the role of electrons in a material, and the analog of material parameters (like disorder) are completely controlled and known and can be changed every 90-second experimental cycle. Measurements on the atoms are used to expose new physics and test theories.

“In most cases, we lack predictive power, because these problems are not readily computable — a classical computer requires exponentially costly resources to simulate many quantum systems,” added David Ceperley, a professor of physics whose team developed the companion simulation. “A key example of this problem with practical challenges lies with materials such as high-temperature superconductors. Even armed with the chemical composition and structure of these materials, it is almost impossible to predict today at what temperature they will super-conduct.”

The different approaches to attacking a particularly important quantum many-particle problem by DeMarco's and Ceperley's groups came together in a new result published in Nature Physics. In their paper, “Probing the Bose glass-superfluid transition using quantum quenches of disorder,” Carolyn Meldgin from DeMarco's group and Ushnish Ray from Ceperley's team share a new understanding of how disorder in a quantum material gives rise to an exotic quantum state called a Bose glass.

“A Bose glass is a strange and poorly understood insulator that can occur when disorder is added to a superfluid or superconductor,” Meldgin said. In her experiments, Meldgin was able to use optical disorder to induce a Bose glass, and Ray exactly simulated the experiment using the Titan supercomputer.

In this work, Ceperley's group achieved the largest scale computer simulations possible of a disordered quantum many-particle system on the biggest supercomputers in existence. These computer simulations were able to simulate relatively large numbers of particles, such as the 30,000 atoms used in DeMarco's experiments.

Together, Meldgin and Ray were able to show something startling–that a dynamic probe in the experiment connects to the equilibrium computer simulations.

“In both cases, the same amount of disorder is required to turn a superfluid into a Bose-glass,” Ray stated. “This result is critically important to our understanding of disordered quantum materials, which are ubiquitous, since disorder is difficult to avoid. It also has important implications for quantum annealers, like the D-Wave Systems device.”