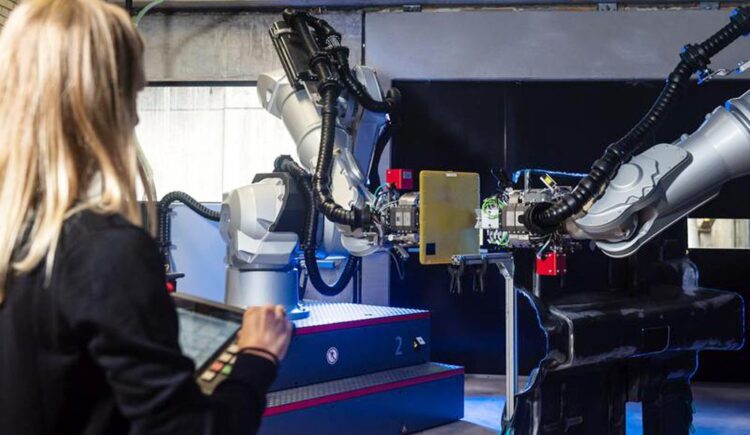 Structural damage in lightweight components – caused by bird strikes on an aircraft wing, for example – is often difficult to detect using conventional non-destructive testing methods. Two new research robots at the Institute of Polymer Technology (IKT) at the University of Stuttgart, working autonomously and synchronously, are intended to optimize the testing technology for multifunctional high-performance materials.

With a soft whir, JAMES raises its arm and grabs a tool head. Almost like a dancer, the robot moves freely through the room with it and places the tool in front of a fiberglass plate, in which a small blemish can be seen. A few seconds later, MAID starts to move in the same way at the other end of the room and brings a corresponding tool into position on the other side of the plate, directly opposite of James. Together, the two robots scan the plate point by point for structural anomalies using air-coupled ultrasonic technology, and sure enough: Minutes later, a blue on turquoise stain appears on the screen next door, revealing the true extent of the damage. And it is much larger and goes much deeper into the structure of the plate than one might have suspected from the outside.

Financing within the framework of large-scale equipment funding

JAMES (Joines Automatic Material Evaluation System) and MAID (Mobile Automatic Inspection Device) are part of a flexible dual robotic system that was built by the team of Prof. Marc Kreutzbruck at the IKT within the framework of a funding program of the German Research Foundation (DFG) for large-scale equipment. “Two typical butler’s names,” says project coordinator Timo Reindl with a laugh, and James & Maid are indeed supposed to reduce our work. “Until now, non-destructive testing with ultrasound has required specially trained employees to scan the test object by hand,” Reindl explains. However, the components are becoming larger and the shapes more complex. As a result, testing by hand quickly becomes very time-consuming, and it is prone to errors – with serious consequences, especially in aircraft or vehicle construction. Added to this is the increasing flexibility in production, where each workpiece may be individual and go its own way on a production line. “So it must be possible to perform a final inspection on each individual workpiece at each point in space,” adds Yannick Bernhardt, who is a research associate at the IKT.

For this reason, JAMES and MAID – weighing about four tons each – can move freely in the room on air cushions. A laser tracking system indicates exactly where the two robots are at any moment. JAMES sends the inspection signals and MAID, which is equipped with highly sensitive measurement technology, receives and evaluates them. The testing comprises three levels: Thus, the robotics platform can localize defects and determine their size and structure, and it also characterizes materials and classifies the reliability of inspection findings. In this way, the robots help decide whether a component is suitable for operation as well as assist with the prediction of its service life.

Currently, the system is testing the innovative air-coupled ultrasonic inspection. This method has not yet been widely used in industry, but it has great potential because it does not require a coupling agent that could leak into the complex sandwich parts. “Other testing methods such as phased-array ultrasonic inspections, active thermography, eddy current testing, optical shearography as well as radar and terahertz methods and vibration analyses will follow in the course of time,” says Tobias Schaible, Head of Product Development at the IKT.

After training, the robots find their own paths

But above all, JAMES and MAID are capable of learning. In the future, they are supposed to find their robot paths themselves and carry out non-destructive component inspections in a fully automated manner. For this, the robots can be trained manually (in a semi-automatic manner) or the “teaching” can be done fully automatically by creating the path plan from CAD data on the computer. “Our goal is an intelligent robotic system,” the scientists explain. For this, the robots capture the component geometry themselves using optical scanners, create a scan pattern fully automatically and select the appropriate tool. Intelligent systems like this not only allow automated non-destructive testing of components, but also provide valuable insight for the continuous optimization of the testing process itself.

At the University of Stuttgart, the main users of JAMES and MAID are, besides the IKT, the Institute of Aircraft Design (IFB), the Institute of Smart Sensors (IIS), and the Materials Testing Institute. In addition, institutes of the Dresden University of Technology and the University of Hamburg will be using the system for testing fiber composite structures as part of collaborations. The system is also open to other partners in Germany and abroad. The first joint projects have already been planned.

Students, especially those in the fields of aerospace engineering, mechanical engineering, electrical engineering, and computer science, can benefit from the system within the framework of their degree thesis or when working as an academic assistant. “We offer them the opportunity to carry out independent tests of fiber-reinforced plastic components on a platform that goes far beyond the state of the art and thus enables them to look beyond their own nose,” says Head of Department Tobias Schaible.