Why Zika is not an STD – Semen inhibits Zika virus infection 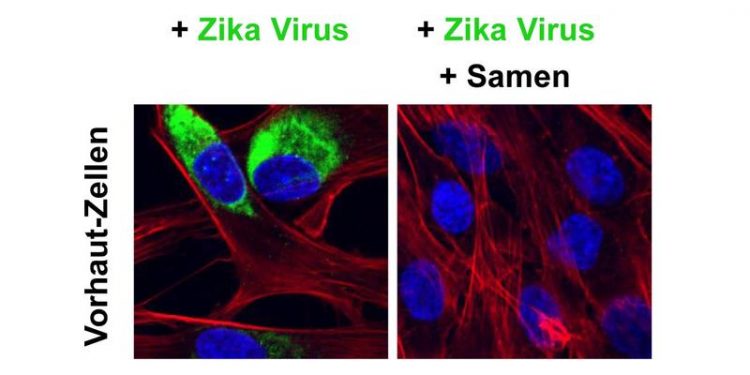 The Zika virus, which is particularly prevalent in Central and South America as well as the Pacific islands, can cause severe courses of meningitis and serious developmental disorders in the brains of newborns, such as microcephaly ('small head').

Ulm's virologists and their research partners have investigated the sexual transmission of this virus by testing in the lab how semen affects Zika infection: 'Semen is rich in both inorganic and organic bioactive substances, such as proteins, enzymes, cytokines, hormones and ions,' explains study leader Professor Jan Münch, who conducts research at the Institute of Molecular Virology at the University Medical Centre Ulm.

These substances influence the vaginal milieu and are key influencing factors when it comes to the infectivity of sexually transmitted diseases. In previous studies, the Institute's scientists discovered that amyloid fibrils in semen dramatically enhance the transmission of the AIDS-causing HI virus. On the other hand, some components of semen can also exhibit anti-bacterial properties. Ulm's researchers set out to investigate how semen and its components affect the infectivity of the Zika virus.

'We were very surprised to find that semen inhibits Zika virus infection instead of enhancing its infectivity as it does with HIV-1,' says first author Dr. Janis Müller, who works as postdoctoral scientist at the Institute of Molecular Virology. The international research team demonstrated that Zika virus replicates efficiently in cells isolated from both genital and rectal tissues. When the cells were exposed to semen before infection with Zika, however, infection rates were significantly lower.

What is responsible for this antiviral effect? Using a wide array of methods – from molecular weight filtration and nanoparticle tracking analysis to fluorescence, confocal and electron microscopy – the scientists eventually uncovered the identity of the 'virus stopper'. 'Extracellular vesicles, which are present in semen in large numbers, reduce attachment of the virus to the cells and thus prevent infection,' Münch explains. These vesicles are bubble-like particles consisting of membranes and proteins and are responsible for the transport and storage of substances to cells.

The scientists were further able to demonstrate in experiments that semen also inhibits infections with the Dengue and West Nile viruses, which, like Zika, are primarily transmitted by mosquitoes. 'These findings afford an explanation as to why Zika is rarely transmitted sexually despite the enormous viral load in semen,' states Dr. Münch.

In Zika-endemic areas, however, it is still advisable to protect against sexual transmission of the virus by using condoms during sexual intercourse, since rare cases of sexual transmission of Zika virus have been documented. Moreover, HIV-1 and other microbial pathogens can be transmitted via unprotected sex. This research project, which also involved scientists from Heidelberg, Hamburg and Helsinki as well as Paris and San Francisco, received funding from the German Research Foundation (DFG) and the Baden-Württemberg Foundation.