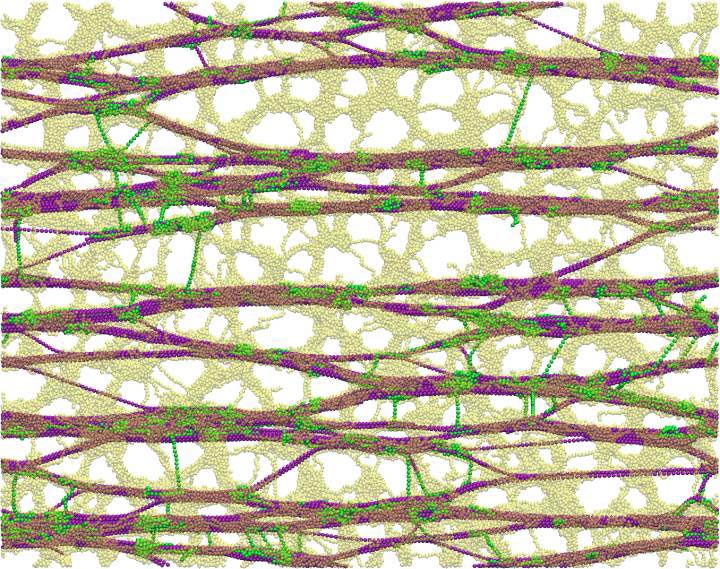 New research modeling the plant cell wall reveals that chains of cellulose bundle together within the cell wall and slide against each other when the cell is stretched, providing a unique combination of strength and extensibility. The image shows the cell wall model during uniaxial stretching, including its primary components cellulose (purple), xyloglucan (green), and pectin (yellow).
Credit: Cosgrove Lab, Penn State

New model reveals that a network of cellulose is key to this unique combination.

A plant cell wall’s unique ability to expand without weakening or breaking–a quality required for plant growth–is due to the movement of its cellulose skeleton, according to new research that models the cell wall. The new model, created by Penn State researchers, reveals that chains of cellulose bundle together within the cell wall, providing strength, and slide against each other when the cell is stretched, providing extensibility.

The new study, which appears online May 14 in the journal Science, presents a new concept of the plant cell wall, gives insights into plant cell growth, and could provide inspiration for the design of polymeric materials with new properties.

“For a long time, the prevailing concept of a plant cell wall has been that of a gel that is reinforced by cellulose fibers, with the stiff cellulose rods acting like steel rebar in cement,” said Daniel Cosgrove, professor of biology at Penn State and senior author of the paper. “However, we determined that cellulose chains instead stick to each other to form a network of cellulose bundles, which provides a lot more mechanical strength than disconnected rods floating in a gel. And it’s the cellulose chains, rather than other components, that limit cell wall expansion, sliding alongside each other like an extension ladder when the cell is stretched.”

Previous approaches to modeling plant cell walls were focused either at a scale too large to incorporate the behavior of individual cell components or at a scale too small–at the atomic level–to incorporate actual mechanics of the wall. In this study, the researchers used a coarse-grained computer model at the level of the polymers that make up the cell wall–the strings of cellulose and other sugar molecules that are linked together in long chains. Instead of modeling individual atoms, the researchers represented cellulose microfibers and other components with chains of beads that behave like sticky springs, in order to replicate these components’ physical properties.

“Unlike many other models, we also accounted for the molecules’ tendency to stick together by modeling the noncovalent bonding between them,” said Cosgrove. “This allowed us to investigate the consequence of interactions between the chains.”

The team specifically modeled layers of an onion cell wall so that they could compare their modeled values of mechanical characteristics to experiments they conducted with actual onion skins. By stretching the onion cell walls in several ways and using molecular insights from the model, they explored the structures responsible for the cell wall’s unique mechanical characteristics.

“Plant cells walls are unique because they must be very strong to help protect and support the plant and very extensible because they must expand when the plant grows,” said Yao Zhang, postdoctoral researcher in biology at Penn State and first author of the paper. “We found that the cellulose microfibers carry most of the stress and are key to the cell wall maintaining both its strength and extensibility.”

The researchers determined that individual cellulose fibers align with and stick to each other, forming a network of bundles. Microfibers in a bundle straighten and can slide along each other, in a type of telescopic action, when the cell is stretched, transmitting forces between them and resulting in the cell’s extension.

“For a long time, researchers have measured the mechanical properties, like stress and strain, of plant cell walls and how these properties change under drought and other conditions,” said Cosgrove. “But until now, we lacked a molecular description of what was going on at the molecular level to understand these measurements. In this study, we clarified the roles of the various components in the plant cell wall and provide a quantitative framework for interpreting experiments used in plant research.”

The insights from this study may be particularly useful in future work investigating how plants regulate their cell wall properties, which impacts the speed and the direction of their growth. For example, young stems elongate rapidly in the spring whereas many fruits grow spherically.

The researchers hope to extend their model to simulate cell walls of other plant species and expand it to encompass an entire cell.

“Our technology currently can’t match a plant’s ability to create such a strong and extensible material,” said Yao. “The design of plant cell walls may provide inspiration for the design of green materials with a variety of applications.”

The research was supported in part by the Center for Lignocellulose Structure and Formation, an Energy Frontier Research Center funded by the U.S. Department of Energy.