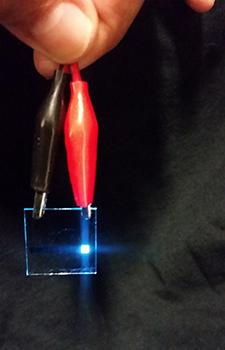 Chemist Mark E. Thompson holds new copper-based LEDs invented by him and a team of chemists that could be a cheaper option for TV and smartphone screens to produce the color -- including blue -- and light. Right now, the industry relies on iridium, an expensive precious metal, for LED light and color. Credit: Mark E. Thompson, USC Dornsife

USC Dornsife chemists have found a cheaper way to light up smartphone and TV screens, which could save manufacturers and consumers money without affecting visual quality.

Copper is the answer, according to their study, published Feb. 8 in the journal Science.

“The current technology that is in every Samsung Galaxy phone, high-end Apple iPhone and LG TV relies on iridium compounds for the colors and light on OLED screens,” says Mark E. Thompson, a chemist at USC Dornsife College of Letters, Arts and Sciences and the Ray. R. Irani Chairman of the Occidental Petroleum Corporation Chair in Chemistry.

“We have been using iridium because you get a highly efficient light emission, but it is the rarest naturally-occurring element on Earth,” Thompson says. “One of our challenges has been to come up with an alternative that is more abundant.”

Prior attempts to generate a copper-based OLED failed. The copper complexes in those studies had weaker structures. The molecules were unstable, with shorter lifetimes than the iridium compounds.

Copper definitely solves the problem of availability since it is a plentiful metal worldwide. Iridium, on the other hand, is found in only a few places — mostly South Africa and parts of Asia.

The most widely-accepted hypothesis that explains iridium's scarcity and its origins is that it traveled here on a meteor — the same one that wiped out the dinosaurs 65 million years ago.

Unless another meteor like that hits Earth, iridium will continue to dwindle in supply. Demand for it is only increasing as smartphones, TVs and other devices that feature OLED screens gain popularity.

OLEDs have come to replace LED LCD screens. In an OLED screen, each pixel generates light, while in the LCD screens, pixels are illuminated by an LED backlight.

Besides its scarcity, iridium has another drawback for OLED technology that has perplexed chemists for more than two decades: weaker molecules for generating blue light.

When the molecules from the iridium compounds are excited, they generate two of the OLED screen's primary colors — red and green — very efficiently, quickly and in devices that give very long operational lifetimes, says Thompson, whose lab engineered the iridium-based red and green molecules.

The third requisite color, blue, has been the bane of OLED technology because blue emissive OLEDs have a short lifetime. Thompson explained that the bonds within the blue molecules tend to break down. Blue molecules also require more electricity than the green and red molecules to energize them. Since blue is among the primary colors for OLED, its poor performance can affect a range of colors that you see on a screen that contain any blue.

Thompson's team may have solved that, too, with their new copper complex — a more rigid molecular complex than the prior, failed types of copper compounds, which were weaker. The new compound's rate of light emission also matches iridium's, so the energy is converted efficiently into light and color, the chemists found.

“Our paper lays out the basic design rules for obtaining iridium-like emission efficiencies out of copper, with colors ranging from blue to green and yellow,” said Rasha Hamze, the study's lead author and a USC Dornsife alumna who recently began working for Universal Display Corporation.

“Achieving efficient blue emission out of copper compounds opens up entirely new possibilities for tackling the problem of short lifetimes in blue devices.”

The team at USC has submitted a patent application for their copper compound.

Thompson says that next, he wants to see if these copper compounds could also lead to the creation of more energy-efficient lighting.

Support for the study

The work was funded by the Universal Display Corporation, where Hamze now works, and National Science Foundation grants DGE-1650112 (for Peltier) and CHE-1661518.

Hamze, Jung, Djurovich and Thompson have disclosed a competing interest as they are listed as inventors on a pending patent for the technology disclosed in the study. Thompson also holds a financial interest in Universal Displays Corporation.