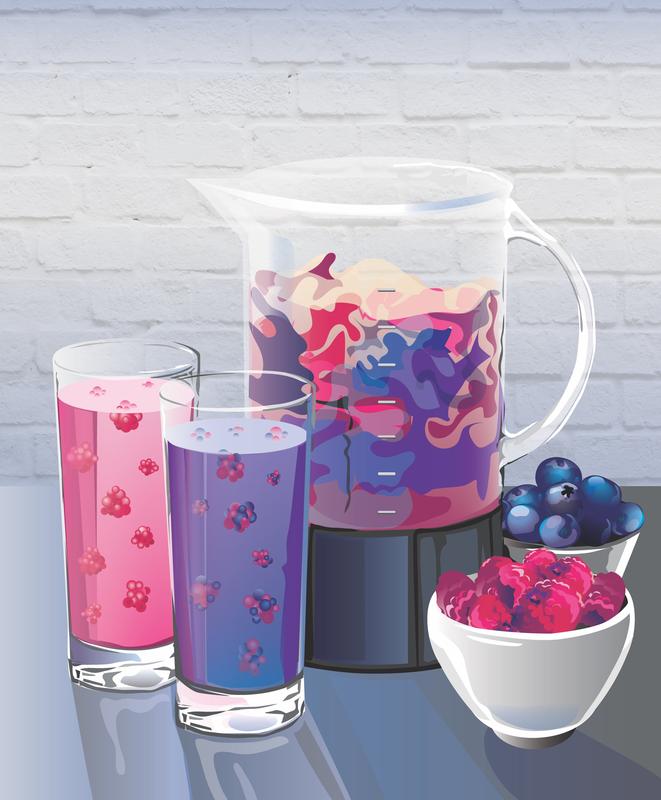 Which blend do you prefer? Like the components of a smoothie, the proteins in condensate droplets of cells clump up differently depending on their chemical composition. Chrysos Designs (MPI f. mol. Genet.)

Five fingers on each hand, five toes on each foot – the entire symmetry of our body is controlled by the HOX genes during development. This group of genes is of fundamental importance for the structure of the developing embryo along the body axes.

A defect in the HOXD13 gene can, for example, lead to surplus and fused fingers, a developmental disorder known as synpolydactyly (Greek: syn “together,” polys “many,” and dáktylos “finger”). The molecular processes that lead to the disease were unknown until now.

A team led by Denes Hnisz and Daniel Ibrahim at the Max Planck Institute for Molecular Genetics (MPIMG) in Berlin has discovered that the mutation leads to the production of proteins with altered chemical properties.

HOXD13 proteins form tiny droplets called condensates together with other molecules, but the composition of the droplets is altered and, as a result, the protein’s regulatory functions are impaired. This genetically driven change in condensate composition could be a new mechanism underlying hereditary diseases, the team of scientists reports in the scientific journal Cell.

But why do proteins accumulate in droplets? “In a salad dressing, vinegar forms small droplets in the oil, and in a similar way certain molecules in the cell combine to form proteinaceous droplets, called condensates,” says Denes Hnisz, one of the senior authors of the study. Due to their chemical properties, the molecules attract each other and separate from their environment.

The phenomenon occurs for practical reasons, says Hnisz. “To read a single gene, the cell needs 300 to 500 proteins. If this gigantic machinery had to assemble in the right time and place by pure chance, it would take around 10 billion years – in other words, forever.” That is why the cell bundles key molecules it needs for specific tasks into little, droplet-like packages.

Molecules such as the HOX proteins are composed of different segments, some of which have a relatively rigid three-dimensional structure, while others, called “intrinsically disordered regions” (IDR), are soft and floppy. “These molecular tails hang out of the proteins like cooked noodles,” Hnisz says. “We believe they are crucial for the formation of cellular condensates.”

HOXD13 has a tail that contains a large number of alanine amino acids in a row. “In patients with synpolydactyly, the alanine tail is expanded from a healthy sequence of 15 residues by at least another 7 residues,” says developmental biologist Daniel Ibrahim, who specializes in genetically induced skeletal malformations. HOXD13 mutations in synpolydactyly were first reported by geneticist Stefan Mundlos in 1996 and who is currently working at the MPIMG, but the molecular mechanisms underlying the disease remained a mystery.

To investigate how the tail extensions of HOXD13 affect the function of the protein, biochemist Shaon Basu, one of the study’s two lead authors, first mixed HOXD13 molecules of different lengths with other proteins required for its function. The modified protein displaced the binding partners from the droplets – the longer the tail, the more pronounced the effect. The researchers demonstrated this behavior in cells using high-resolution microscopy, working with colleagues at Freie Universität Berlin.

But does the altered composition of cellular condensates affect the function of HOXD13? “We examined embryos of mice with an extended HOXD13 gene, which develop synpolydactyly just like human patients,” says Ibrahim. In these embryos, the condensate droplets in the cells of developing limb buds had a different composition than in mice without the genetic modification. The limb buds possessed fewer of the interdigital cells that usually occupy the space between the fingers and that disappear later.

“It could be possible to alter the composition of mutant condensates with chemical compounds – like a drug”, says Basu. “I think that there is a real and fascinating chance that we could eliminate pathogenesis by fixing the disease mechanism one day.”

Mechanisms relevant for other diseases

HOXD13 is not the only protein that has a molecule tail that influences its behavior in condensates and its function. Computational biologist Sebastian D. Mackowiak, who is the study’s lead author along with Shaon Basu, analyzed another 1,500 human gene regulatory proteins with molecular tails and was able to identify seven types of tails with different chemical properties. Around 300 gene regulatory proteins, like HOXD13, have a high alanine content in their tails.

The researchers then altered the number of alanine residues of some of these proteins and found that the modifications led to alterations of condensate composition and the impediment of the protein’s functions in the cell.

The work is a triumph for Hnisz and his colleagues. Condensates in the form of small cellular balls were first described by microscopists decades ago, but until recently their functional significance was doubted by many.

“The fact that condensates are directly related to the development of a disease can no longer be denied,” says Hnisz. “It is absolutely plausible that many other diseases are also caused by the altered composition of cellular condensates.”