Sensing Gravity with Acid: Scientists Discover a Role for Protons in Neurotransmission 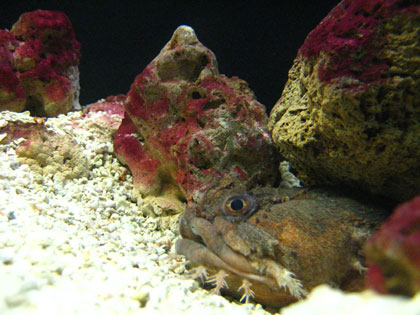 The toadfish (Opsanus tau) is a model organism used by the Highstein lab to study hearing, balance, and synaptic transmission. Credit: Wikimedia

The team, led by the late MBL senior scientist Stephen M. Highstein, discovered that sensory cells in the inner ear continuously transmit information on orientation of the head relative to gravity and low-frequency motion to the brain using protons as the key synaptic signaling molecule. (The synapse is the structure that allows one neuron to communicate with another by passing a chemical or electrical signal between them.)

“This addresses how we sense gravity and other low-frequency inertial stimuli, like acceleration of an automobile or roll of an airplane,” says co-author Richard Rabbitt, a professor at University of Utah and adjunct faculty member in the MBL’s Program in Sensory Physiology and Behavior.

“These are very long-lasting signals requiring a a synapse that does not fatigue or lose sensitivity over time. Use of protons to acidify the space between cells and transmit information from one cell to another could explain how the inner ear is able to sense tonic signals, such as gravity, in a robust and energy efficient way.”

The team found that this novel mode of neurotransmission between the sensory cells (type 1 vestibular hair cells) and their target afferent neurons (calyx nerve terminals), which send signals to the brain, is continuous or nonquantal.

This nonquantal transmission is unusual and, for low-frequency stimuli like gravity, is more energy efficient than traditional synapses in which chemical neurotransmitters are packaged in vesicles and released quantally.

The calyx nerve terminal has a ball-in-socket shape that envelopes the sensory hair cell and helps to capture protons exiting the cell. “The inner-ear vestibular system is the only place where this particular type of synapse is present,” Rabbitt says. “But the fact that protons are playing a key role here suggests they are likely to act as important signaling molecules in other synapses as well.”

Previously, Erik Jorgensen of University of Utah (who recently received a Lillie Research Innovation Award from the MBL and the University of Chicago) and colleagues discovered that protons act as signaling molecules between muscle cells in the worm C. elegans and play an important role in muscle contraction. The present paper is the first to demonstrate that protons also act directly as a nonquantal chemical neurotransmitter in concert with classical neurotransmission mechanisms. The discovery suggests that similar intercellular proton signaling mechanisms might be at play in the central nervous system.

Stephen Highstein, who died in January 2014, was associate director of the MBL’s Program in Sensory Physiology and Behavior. Mary Anne Mann, a research associate in the program, also participated in this research, as did Gay Holstein of Mt. Sinai School of Medicine.

The Marine Biological Laboratory (MBL) is dedicated to scientific discovery and improving the human condition through research and education in biology, biomedicine, and environmental science. Founded in Woods Hole, Massachusetts, in 1888, the MBL is a private, nonprofit institution and an affiliate of the University of Chicago.