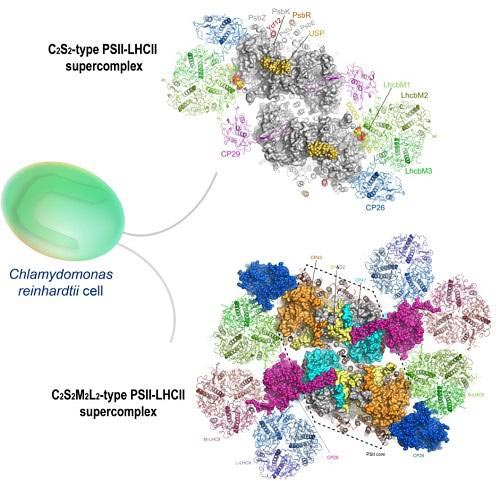 A new study by Chinese and Japanese researchers has now characterized the light-harvesting system of Chlamydomonas reinhardtii, a common unicellular green alga. This research enhances understanding of the molecular basis for efficient light harvesting as well as photoprotection in green algae under variable light conditions.

The study was conducted by Dr. LIU Zhenfeng's group from the Institute of Biophysics (IBP) of the Chinese Academy of Sciences and Dr. Jun Minagawa from Japan's National Institute for Basic Biology. Results were published online in Nature Plants on Nov. 25, 2019 in an article entitled “Structural insights into light harvesting for photosystem II in green algae.”

Oxygenic photosynthesis in algae and plants relies on photosystem II (PSII) molecules and light-harvesting complex II (LHCII) molecules, and their associated supercomplexes, to convert light energy into chemical energy. For example, PSII catalyzes the splitting of water molecules into oxygen and protons. PSII also assembles with LHCII at the peripheral region to absorb photon energy efficiently.

C. reinhardtii has been an important model for photosynthesis research over the past few decades as well as a platform for the production of high-value products such as biofuel and pharmaceutical compounds. Its LHCII molecules join with PSII molecules to form the C2S2M2L2 supercomplex – the largest known algae or plant PSII-LHCII supercomplex, in addition to the smaller C2S2-type supercomplex.

The researchers solved the structures of both C2S2M2L2 and C2S2 by using cryo-electron microscopy (cryo-EM). They also deciphered in great detail the assembly mechanisms and energy transfer pathways of the two supercomplexes.

By analyzing the structure of C2S2M2L2 supercomplex, the scientists found that the minor antenna complexes CP29 and CP26 contain several green algae-specific regions that are absent in homologs from land plants. They discovered that these special regions on CP29 play a crucial role in linking L-LHCII and M-LHCII and stabilizing the resulting assembly, whereas those of CP26 strengthen its own interactions with S-LHCII (LHCII strongly-associated with PSII).