Protein associated with many diseases fully visualized for first time 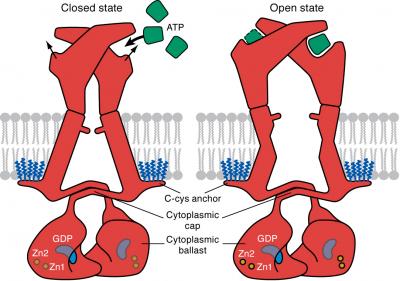 For the first time, researchers have observed at the molecular level how a protein associated with numerous health problems works.

The discovery – which could one day inspire new drugs to treat inflammation, coronary artery disease, cancer, multiple sclerosis and more – was published today in the journal Cell.

They specifically studied the P2X7 receptor, a subtype of the ligand-gated ion channel P2X family that has been associated with inflammation, plaque buildup in arteries, cancer metastasis, neurological conditions and more.

P2X7 is unusual because once activated, its channel remains open indefinitely, continually allowing charged particles to enter a cell and trigger the signaling pathways of inflammation, ultimately leading to cell death. Such signaling behavior could contribute to the long list of ailments that are associated with the receptor.

Unlike previous efforts to image the P2X7 receptor, the team's cryo-EM imaging approach allowed them to capture the protein receptor in its entirety.

This enabled them to visualize the parts of the receptor that sit inside the cell. As a result, they were able to directly observe how these parts are modified with fatty acid molecules called palmitoyl groups. When Mansoor and his colleagues removed these groups, they found the receptor no longer stayed open indefinitely, shutting down its ability to trigger signaling. They also unexpectedly discovered a guanosine nucleotide was bound to P2X7 inside the cell.

“Researchers have known ligand-gated ion channels are modified by palmitoyl groups, but we had never directly observed it until now,” said Mansoor, an assistant professor of medicine (cardiovascular) in the OHSU School of Medicine and Knight Cardiovascular Institute. “Our finding could be used as a model of how palmitoylation modifies other ion channels.”

Mansoor and his team will further explore the roles that palmitoyl groups and the guanosine nucleotide play in P2X7 intra-cellular signaling, their potential impact on human health, and how they could be targeted to treat health conditions associated with the receptor.

This research was supported by the National Heart, Lung and Blood Institute (grant K99HL138129). The team used microscopes at the Pacific Northwest Center for Cryo-EM, which OHSU and Pacific Northwest National Laboratory established in 2018 with support of the National Institutes of Health, and conducted research in the OHSU Vollum Institute lab of Eric Gouaux, Ph.D., who is supported by the Howard Hughes Medical Institute.