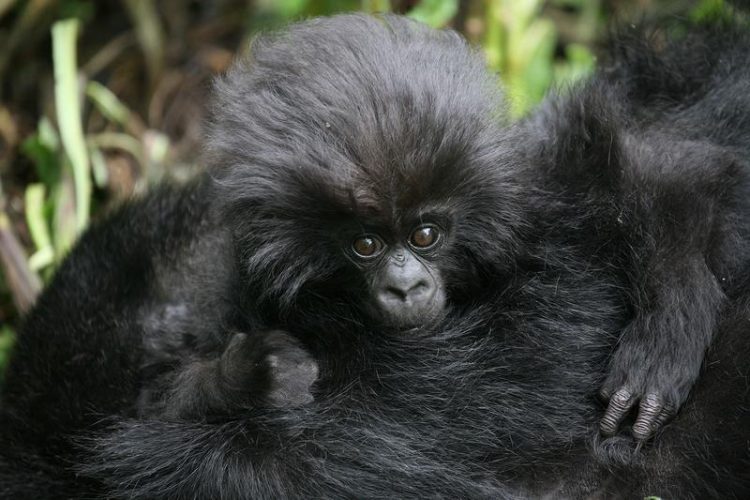 A reason for joy: According to the latest census, more than 600 mountain gorillas live in the Virunga Volcanoes, more than twice as many as thirty years ago. The number of wild mountain gorillas worldwide exceeds 1,000 animals. Credit: Martha Robbins, MPI-EVA Usage Restrictions: The image may only be used with appropriate caption and credit and for reporting on this research & census only.

“This represents one of the rare success stories in conservation. The population of mountain gorillas in the Virunga Volcanoes has more than doubled in the past three decades, despite intensive threats of poaching, habitat degradation, and civil conflict,” stated Martha Robbins, research scientist and gorilla expert at the Max Planck Institute for Evolutionary Anthropology. “This increase exemplifies the dedicated efforts of the governments of Rwanda, Uganda, and the Democratic Republic of Congo to conserve these critically endangered great apes, and notably, the hard work of park staff on the ground. This dramatic increase also shows that extreme conservation efforts including tourism, veterinary work, and community projects can have a positive impact on one of our closest living relatives.”

The census was a combination of intensive fieldwork in 2015 and 2016 and detailed genetic analysis. Field teams walked more than 2,000 kilometres to sweep intensively through the entire 440 square kilometres Virunga Volcanoes searching for trails and nest sites left by the gorillas. Genetic analysis, taking more than 18 months to complete, was conducted on approximately 1,100 fecal samples to determine that there are a minimum of 186 unhabituated (not regularly contacted by humans) gorillas. The remaining 70 percent of the population consists of 418 gorillas that are habituated for research and tourism.

The last census conducted in the Virunga Volcanoes was in 2010, when the population was estimated to be a minimum of 480 gorillas. The current figure represents a 26 percent increase in the number of gorillas over a six-year-period, which is a 3.8 percent annual rate of increase. This increase is due to improved methods used in this recent census as well as actual growth of the population. The 604 gorillas were found in 41 social groups and 14 solitary males.

Conducting the census was a large collaborative effort among the park services of the three countries where mountain gorillas live, namely Rwanda, Uganda, and the Democratic Republic of Congo, several non-governmental conservation organizations, and the Max Planck Institute for Evolutionary Anthropology in Leipzig, Germany. Routine censusing such as this one is a crucial part of adaptive management strategies to help determine whether a population is increasing or decreasing in size and decide if conservation efforts are effective or should be modified. The population of mountain gorillas in the Virunga Volcanoes numbered only about 250 gorillas in the mid-1980's.

“Genetic analysis of DNA from fecal samples allows us to count gorillas without even observing them,” observes Linda Vigilant, head of the primatology genetics lab in Leipzig. “Next we will be analyzing the detection history of individuals over time to get more insights into how groups form and group membership changes”.

The Virunga Massif mountain gorilla census was conducted by the Protected Area Authorities in the DRC, Rwanda and Uganda (l'Institut Congolais pour la Conservation de la Nature, the Rwanda Development Board and the Uganda Wildlife Authority) under the transboundary framework of the Greater Virunga Transboundary Collaboration.

The census was funded by Fauna & Flora International, WWF and Partners in Conservation at the Columbus Zoo & Aquarium. Additional financial support to the census science committee was provided by Berggorilla & Regenwald Direkthilfe.