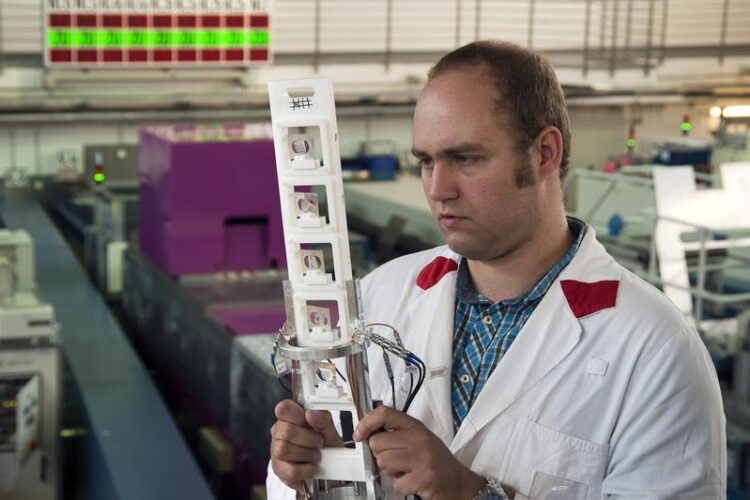 Neutrons show a connection between lithium concentration and depression

Depressive disorders are among the most frequent illnesses worldwide. The causes are complex and to date only partially understood. The trace element lithium appears to play a role. Using neutrons of the research neutron source at the Technical University of Munich (TUM), a research team has now proved that the distribution of lithium in the brains of depressive people is different from the distribution found in healthy humans.

Lithium is familiar to many of us from rechargeable batteries. Most people ingest lithium on a daily basis in drinking water. International studies have shown that a higher natural lithium content in drinking water coincides with a lower suicide rate among the population.

In much higher concentrations lithium salts have been used for decades to treat mania and depressive disturbances. However, the exact role lithium plays in the brain is still unknown.

Physicists and neuropathologists at the Technical University of Munich joined forensic medical experts at Ludwig-Maximilian-University of Munich (LMU) and an expert team from the Research Neutron Source Heinz Maier-Leibnitz (FRM II) to develop a method which can be used to precisely determine the distribution of lithium in the human brain. The team hopes to be able to draw conclusions for therapy as well as to gain a better understanding of the physiological processes involved in depression.

In order to determine where how much lithium is present in the brain, the researchers analyzed 150 samples from various brain regions – for example those regions which are presumably responsible for processing feelings. At the FRM II Prompt Gamma-Ray Activation Analysis (PGAA) instrument the researchers irradiated thin brain sections with neutrons.

“One lithium isotope is especially good at capturing neutrons; it then decays into a helium atom and a tritium atom,” explains Dr. Roman Gernhäuser of the Central Technology Laboratory of the TUM Department of Physics. The two decay products are captured by detectors in front of and behind the sample and thus provide information on where exactly the lithium is located in the brain section.

Since the lithium concentration in the brain is usually very low, it is also very difficult to ascertain. “Until now it wasn’t possible to detect such small traces of lithium in the brain in a spatially resolved manner,” says Dr. Jutta Schöpfer of the LMU Munich Institute for Forensic Medicine. “One special aspect of the investigation using neutrons is that our samples are not destroyed. That means we can repeatedly examine them several times over a longer period of time,” Gernhäuser points out.

“We saw that there was significantly more lithium present in the white matter of the healthy person than in the gray matter. By contrast, the suicidal patient had a balanced distribution, without a measurable systematic difference,” summarizes Dr. Roman Gernhäuser.

“Our results are fairly groundbreaking, because we were able for the first time to ascertain the distribution of lithium under physiological conditions,” Schöpfer is glad to report. “Since we were able to ascertain trace quantities of the element in the brain without first administering medication and because the distribution is so clearly different, we assume that lithium indeed has an important function in the body.”

“Of course the fact that we were only able to investigate brain sections from three persons marks only a beginning,” Gernhäuser admits. “However, in each case we were able to investigate many different brain regions which confirmed the systematic behavior.”

“We would be able to find out much more with more patients, whose life stories would also be better known,” says Gernhäuser, adding that it might then also be possible to answer the question as to whether the deviating lithium distribution in depressive persons is a cause or a result of the illness.

The research work was funded by the German Research Foundation (Deutsche Forschungsgemeinschaft; DFG). Scientists from the Institute for Forensic Medicine at Ludwig Maximilian University of Munich as well as from the TUM Institute of Pathology and TUM Department of Physics took part in the research.

The Research Neutron Source Heinz Maier-Leibnitz (FRM II) provides neutrons and positrons for research, industry and medicine. Operating as a user facility for up to 1200 guest scientist per year, the Heinz Maier-Leibnitz Zentrum (MLZ) offers a unique suite of high-performance neutron scattering and positron instruments. The MLZ is a cooperation of the Technical University of Munich, the Forschungszentrum Jülich and the Helmholtz-Zentrum hereon. It is funded by the German Federal Ministry of Education and Research, together with the Bavarian State Ministry of Science and the Arts and the partners of the cooperation.