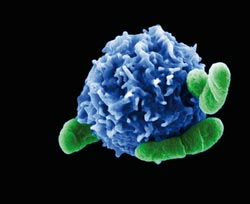 Regulatory T cells (or “Tregs” for short) play a central role in the human immune system: They guide all of the other immune cells and make sure they are tolerant of the body’s own cells and harmless foreign substances.

How Tregs become Tregs in the first place has been only incompletely understood – until now. Scientists at the Helmholtz Centre for Infection Research (HZI) in Braunschweig, Germany, along with their colleagues at the Hannover Medical School (MHH) have recently gleaned important new insights into the workings of these cells.

As it turns out, origin is key – greater numbers of Tregs are produced within certain lymph nodes than in others. The researchers are now publishing their insights in the scientific journal Mucosal Immunology.

Without regulatory T cells, the human defence system would not work properly. Defender cells would be fiercely fighting off even harmless foreign substances like the parts of certain kinds of food, for example, as the immune system would simply not be “tolerant” towards these harmless substances. This tolerance is mediated through the Tregs – they are “tolerogenic.”

They instruct other immune cells as to which intruders really do need to be fought off and which ones do not pose a threat. However, even regulatory T cells have to first acquire this unique skill. What we have known for some time now is that they receive their “training” inside lymph nodes. “Lymph nodes are basically the immune system’s meeting points if you will,” says Prof. Jochen Hühn, Head of Experimental Immunology at the HZI. “Here, different types of immune cells meet up and also encounter antigen.” An antigen is a structure the immune system is able to recognize like component parts of pathogens or foods.

The researchers compared the development of murine T cells obtained from lymph nodes from various locations in the body, like the liver, intestine, and skin. In the process, they learned that more Tregs capable of teaching other cells to be tolerant of food antigens are made inside lymph nodes of the liver and intestine – a property the lymph nodes maintained even when they were transplanted to the skin. Conversely, skin lymph nodes did not become more tolerogenic if transplanted to the intestine. The HZI scientists made these discoveries together with their colleagues from Prof. Oliver Pabst’s team at the MHH Institute of Immunology.

Based on their observations, the scientists deduced that lymph node location influences the maturation process of the cells they contain. “The cells retained their original skills for weeks following the transplant,” says Dr. Sascha Cording, one of the study’s first authors. “You might say lymph nodes have something like a location-specific memory.”

And this in spite of the fact that all the various types of blood cells within a lymph node, including the immune cells, are constantly replaced, which means the lymph nodes’ location memory must be encoded somewhere in its stroma.

Additional experiments allowed the scientists to probe just how lymph nodes obtain their memory: Following birth, both the supply of vitamin A and the intestinal bacterial microflora figure prominently into this process. Without these two influencing factors, the lymph nodes simply forget about their origin and lose their tolerogenic properties.

These findings about lymph node imprinting apply to humans as well: An inadequate supply of vitamin A after birth or meddling with the baby’s developing microflora through administration of antibiotics can interfere with the lymph nodes’ long-term memory. “At what age this process happens in humans we cannot as of yet pinpoint with any certainty,” says Hühn. “Whether we’re talking about the first few days, weeks, or months even, is difficult to surmise.” The next step will be identifying the potential repercussions interfering with early imprinting of the immune system. Down the line, things like food allergies or autoimmune diseases might be the result.

The department “Experimental Immunology“ at the HZI studies the development of immune cells and the cellular and molecular mechanisms that keep the immune system in balance. The scientists pay particular attention to the so-called regulatory T cells.