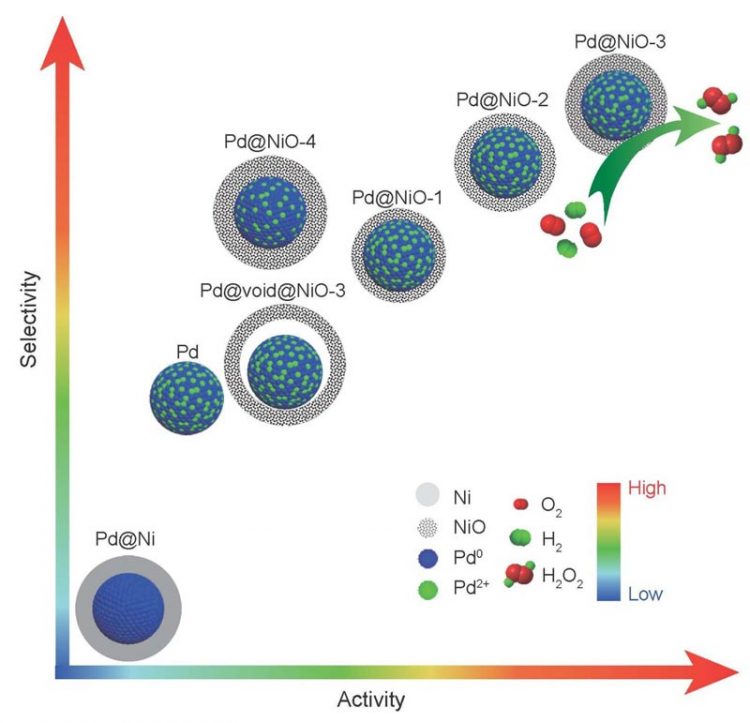 Hitherto, the direct synthetic route is mainly achieved by the supported Pd-based catalysts. The major problem associated with that is related to the low selectivity of H2O2. Despite great efforts have been devoted to constructing the Pd-based catalysts by introducing the second metals, understanding high-performance Pd-based catalysts for the direct H2O2 generation from either deep characterization or theoretical investigation are still extremely limited.

These scientists likewise interpreted the mechanism from both electronic and energetic views.

“Traditional Pd-based catalysts are very active for the side reactions, such as the decomposition and hydrogenation of H2O2 as well as the formation of H2O,” they state in an article titled “Surface engineering in the interface of core/shell nanoparticles promotes hydrogen peroxide generation”.

“It is considered that the intrinsic surface property of Pd-based catalysts is essential for the selectivity and activity of the direct H2O2 synthesis,” they add. “This arises because the barrier for O-O bond scission is sensitive to Pd surface structure, the key parameter governing H2O2 synthesis and decomposition activity.”

The creation of porous NiO shell is beneficial for exposing Pd active sites and thus enhancing the productivity of H2O2. “By tuning the composition of Pd@NiO-x NPs and the reaction condition, the efficiency of H2O2 synthesis could be well optimized with 5 wt% Pd@NiO-3/TiO2 exhibiting the highest productivity (89 mol/(kgcath)) and selectivity (91%) to H2O2 as well as excellent stability,” they state.

“The first principles simulations further revealed the mechanism from both electronic and energetic views,” the scientists interpreted. “The superiority in selectivity is achieved by a spontaneous bond scission of H-H and charge transfer from O20 to O22- within the cavity of NiO interfacing with Pd surface.,”