Home / Life Sciences and Chemistry / New Insights into the Signaling Network of the Vital Protein mTOR
22.02.2013

New Insights into the Signaling Network of the Vital Protein mTOR 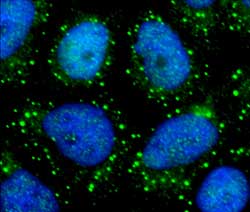 The research group of Prof. Michael N. Hall at the Biozentrum of the University of Basel has now identified a number of new mTOR-regulated proteins, including an enzyme that is essential for the production of the building blocks of DNA. Their results were recently published in the journal «Science».

The protein mammalian target of rapamycin (mTOR) controls fundamentally important processes such as cell growth and metabolism. As the core component of two complexes, mTORC1 and mTORC2, it stimulates the production of proteins and fats, and ensures that cells have an adequate energy supply. Dysregulation of the finely-tuned mTOR signaling network is causally involved in the development of serious diseases such as cancer, cardiovascular diseases and diabetes. The search for previously unknown mTOR-regulated proteins could provide new approaches to treat these diseases.

Because of the central role of mTOR in the cell, scientists suspect that many of the proteins and processes it controls remain to be discovered. By means of a very advanced technology, the so-called quantitative phosphoproteomics, the research group of Hall has now been able to identify more than 300 new mTOR target proteins which perform a wide range of tasks.

Detailed investigations showed that the mTORC1 stimulates, amongst others, the formation of nucleotides and thus controls the growth and proliferation of cells. Nucleotides are the building blocks of the genetic material and are manufactured in several steps from simple molecules. The first steps in the biosynthesis of nucleotides are mediated by the CAD enzyme. mTORC1 enhances the association of multiple CAD enzymes to form oligomers and thereby stimulates CAD activity and the production of nucleotides.

Although we now understand well how mTOR acts, the current results show that there are still many details which are unknown. The comprehensive investigation of the mTOR-controlled signaling pathways and the effects of regulation deficiencies are enourmously important for the understanding of disease processes and the development of new therapeutic approaches. With their research, Hall and his team add another important piece to the mTOR puzzle.