How the power plants of the cell get shaped 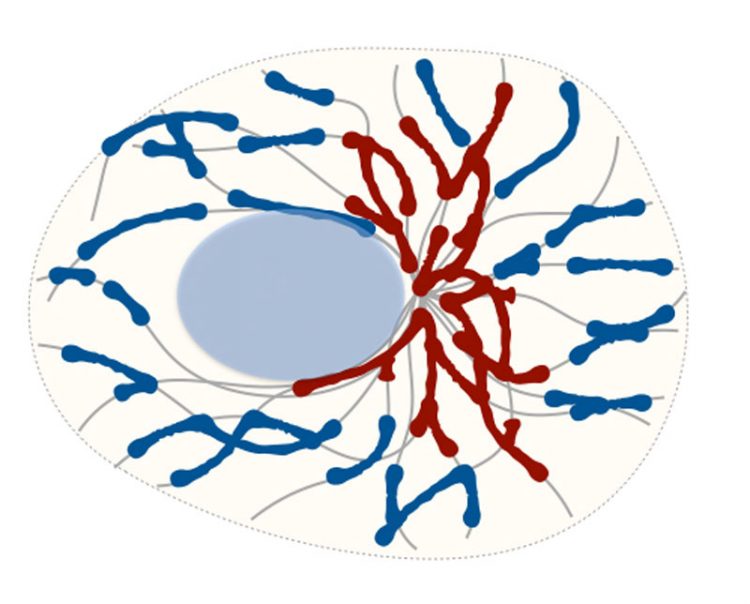 Cytoskeleton (grey lines) affects fusion of mitochondria. By this it shapes their network and simultaneously separates them into peripheral dispersed fraction (blue) and central condensed ones (red) © HZI / Sukhorukov

Mitochondria are the power plants of cells. They control the production of energy and initiate various central cellular processes. If they become non-functional, this can cause or favour a number of diseases. These diseases are mainly of a neurological or muscular type, but include ageing processes as well.

Systems biologists at the Helmholtz Centre for Infection Research (HZI) in Braunschweig used a new mathematical model to describe which mechanisms are involved in the formation and maintenance of the dynamic mitochondrial networks in cells. The scientists published their results in “Scientific Reports”.

One special feature of mitochondria is their pronounced dynamic behaviour inside the cell. They form a network that changes on a time scale of minutes through fission and fusion with other mitochondria again. Their special structure has a significant influence on how effectively they can supply energy:

Fibrous network structures produce a large amount of energy, whereas smaller fragments are less effective. “These processes play a role in cell ageing as well. Over-stressed or damaged mitochondria get fragmented and are then subjected to disposal,” says Valerii Sukhorukov, who is a scientist at the Systems Immunology department at the HZI and the principal author of the study.

But how does the dynamic balance between the small fragments and the effective fibres of mitochondria get established? This was the central question addressed by the researchers. “Mechanisms of this type cannot be studied by biochemical analyses alone. This requires model-based simulations on a computer that explain the dynamic changes in the cell very well,” says Prof Michael Meyer-Hermann, who directs the Systems Immunology department.

For this purpose, the scientists developed an initial mathematical model that is based on the different lengths of the mitochondrial fragments in linear or branched arrangement. The central result of the study is that an exact description of the mitochondria in the cell becomes possible only if the random motions of mitochondria along the fibres of the cellular skeleton, called microtubules, are taken into account.

This resulted in a so-called graph model that is based on the density of the microtubules and their intersections within the cell. The model describes all forms of mitochondria that have been found in experiments thus far and it also yields explanations for events that were understood incompletely thus far.

Sukhorukov and his colleagues would like to use the new mathematical model in the future to analyse the quality control of the fragmented mitochondria and to understand how cells control or remedy damage to their mitochondria. “This is very important to understand how cells control their energy balance despite the accumulation of damage with advancing age. This would allow us to draw conclusions about certain genetics-related diseases such as Parkinson's and ageing processes in the immune system,” says Sukhorukov.

http://www.helmholtz-hzi.de/en/news_events/news/view/article/complete/how_the_po… – This press release at helmholtz-hzi.de
http://dx.doi.org/10.1038/srep13924 – Link to the original publication